The all-new Subaru Legacy has appeared in Chicago - might we see a Turbo RS after all? 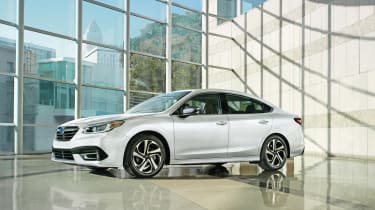 Subaru enthusiasts rejoice, as the Japanese marque has revealed the seventh generation Legacy with a return of the turbocharged flat-four engine. The new Legacy is all-new from the ground up, and also features a swathe of new technology and safety features to rival the medium-sized saloons it competes with in the US and Canada.

As before, we aren’t expecting the saloon variant to arrive in the UK, but those with fanciful memories of the Legacy RS Turbo barreling down Welsh rally stages will surely be buoyed by the news the Legacy saloon will once again be available with a turbocharged engine.

> Click here for our review of the new Mazda 6

That engine specifically is a new turbocharged 2.4-litre flat-four unit that till now has only been available in the Ascent seven-seater SUV, which is not available in the UK. It produces a relatively mild 254bhp and 277lb ft of torque, but rather than being a hot new derivative, instead replaces the old 3.6-litre flat-six that had been fitted in high-spec American market models. This is compounded by its exclusive pairing with a CVT transmission, but 60mph only takes 6.1sec to arrive, so performance is still healthy enough. A heavily revised 2.5-litre flat-four will also be available on lesser trims. 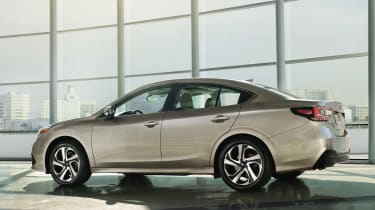 The new Legacy also follows convention by sitting on Subaru’s Global Platform, the one that now underpins a majority of Subaru’s range globally, with power going to all four wheels in Subaru’s usual fashion. One advantage of transferring to the new platform is a generous increase in torsional stiffness, with a massive 70 per cent jump over the previous model.

The styling hasn’t taken a gargantuan leap to the previous model, but it’s the interior which has taken a massive step forward, adopting a new 11.6-inch portrait infotainment display that dominates the interior. Within that screen, almost all the car’s functions are controlled, with enough real estate on screen to keep multiple apps open at once.

Recent generations of Legacy might not have might not have followed through on its performance-orientated predecessors, but as the nostalgic among us can’t help but hope for an RS Turbo renaissance.