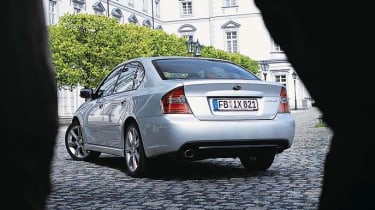 Remember the last generation Legacy? Thought not, but there's more chance of you remembering this one, thanks to the intriguingly named 3.0R spec B. This sporty range-topper comes with a 242bhp flat-six, an Impreza STi-based six-speed gearbox and, of course, four-wheel drive. Claimed performance is zero to 60mph in 6.5sec and 151mph all-out, and this generously equipped saloon costs a very keen £26,500, or £27,500 in 'Sports Tourer' estate form.

If you're at all mechanically minded, you'll spot that the drivetrain of the spec B Legacy is similar to that of the 911 Carrera 4, only reversed. If the Subaru's flat-six serves up anything of the character of the Porsche's, it could be on to something. The engine can already be found in the nose of the regular Legacy 3.0R and Outback but coupled to an auto 'box. The new six-speed manual built for the spec B uses only about half of the components from the Impreza, the casing and gear teeth design being new and intended to make the unit more refined.

Visually, the spec B is distinguished from the 3.0R only by slightly wider seven-spoke alloys and black headlamp surrounds. That's it. If we're being polite, it's discreet, if we're being honest, it's rather bland. The Legacy is Japan's Car of the Year 2003/2004 and is, says Subaru, a rival for the Jaguar XJ and BMW 5-series, yet it's not a big car and appears narrow, especially when viewed from the rear.

Then again, lack of bulk is a good thing in a sports saloon, and the specification suggests that some of the Impreza WRX and STi magic has been weaved into this more restrained, more mature package. Bilstein supplies STi-style inverted struts and complementing the four-wheel-drive system's viscous centre diff is a limited-slip rear diff.

The interior is simply styled and tidily finished with decently textured plastics, some steel grey highlights and leather, which is standard. Refined this Legacy certainly is; at idle the air conditioning fan on its lowest speed vies with the flat-six for aural dominance. Blip the throttle and there's just a hint of flat-six rumble. For me, the seat didn't go quite low enough and the lack of wheel reach adjustment is unexpected, but the driving position is sound and the wheel sportily small.

The ride is quite knobbly around town - you find yourself steering around potholes and slightly raised drain covers - but feels settled and well-controlled at speed. The flat-six is strong and smooth at moderate revs, and the gearshift feels leggy but satisfyingly positive and mechanical, allied to well-stacked ratios. Wind the engine right round to the redline and it stays creamy smooth and keeps piling on the power, finally taking on the appealing, gruff zing of a 911 motor through the last 1000rpm. You don't really have to go there, though; the Legacy feels at its keenest hauling hard in the low- and mid-range.

Despite relatively narrow tyres for the rim diameter - mere 215/45 section ZR18s - traction is never an issue, even in the wet. Grip is fine too, the limit identified by modest understeer, while mid-corner poise is comfortable and assured. It's not an especially dynamic or involving drive though, thanks mainly to the numbness of the steering.

Subaru hopes to tempt buyers upgrading from Imprezas but I can't quite see it. The spec B delivers good pace but little else of the Impreza's up front character. Nor can I see many Jaguars or BMWs of any denomination being traded against it; it feels caught between two range sizes and on price is more aligned with 3-series BMWs and top-line Jaguar X-types. The Legacy is a fine car with a dash of character and plenty of standard kit, including leather and sat-nav, but its driving experience doesn't lodge in the part of the brain labelled 'must have'. 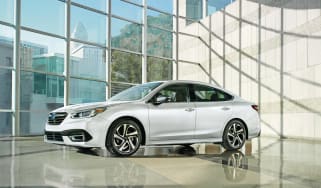 The all-new Subaru Legacy has appeared in Chicago - might we see a Turbo RS after all?
Ex-Vatanen Subaru Legacy Group A to be auctioned at Race Retro

Built for the 1993 season, this Legacy's rallying history is short – but its significance is much greater
Subaru Legacy Concept at LA motor show 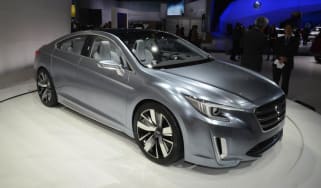 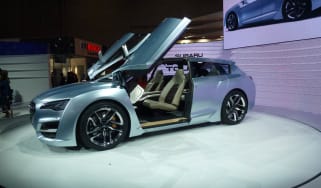 Subaru has unveiled the Advanced Tourer concept at the 2011 Tokyo motor show, giving a first impression of the look of the new Legacy
Subaru Legacy 2.5GT tS review 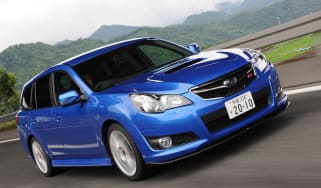 Sporty limited edition Subaru Legacy gets handling by STI, but is Japan only
Subaru Legacy 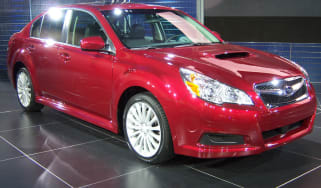 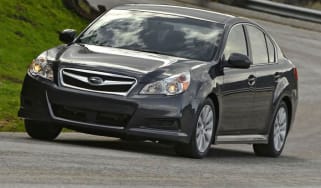 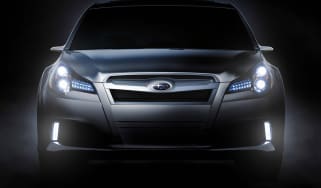