Subaru has revealed a sleek new concept car that will inspire the new Legacy model. Pictures and details here 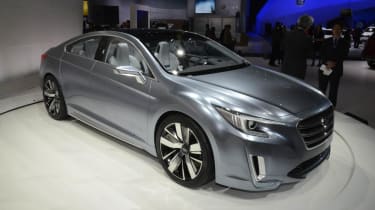 The new Subaru Legacy concept car, has debuted at the Los Angeles motor show, alongside the production-ready version of the Subaru WRX. The company says the concept celebrates the 25th anniversary of the Legacy model.

The concept will likely influence the next-generation model, and features what Subaru call dynamic, secure and practical qualities. Featuring a low-slung, almost four-door coupe roof, it’s a big step away from the very conventional looks of the current production models.

Featuring a new-style of grille, first seen on the Subaru Viziv Concept at Geneva this year, the look evolves the new family look Subaru is moving to with its new vehicles.

A new interior, Subaru’s most high-tech ever apparently, includes a smartphone-style central display, with a driver-focused feel. It also features Subaru’snew ‘EyeSight’ driver aid, that monitors the road ahead for possible dangers.

Since the Legacy was first produced in 1989, the model has featured a boxer engine and symmetrical all-wheel drive, and it is likely that the model will continue to feature the unique drivetrain for some time to come.

As of yet, Subaru has not confirmed when the new model will be going into production, and it also hasn’t made any decision on whether or not any models will be coming to the UK.