Sporty limited edition Subaru Legacy gets handling by STI, but is Japan only 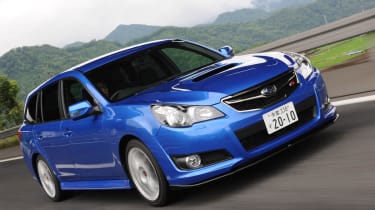 A whole new sub-brand, tS stands for ‘tuned by STI’, and the first example of this new line-up is the just-launched Legacy 2.5GT tS. Focusing on sharper, more responsive handling and, get this, better ride quality at the same time, just 600 units will be made – and offered in Japan only.

The tS certainly looks better. Better, that is, than the chunky and rather awkward Legacy on which it’s based. Specially designed STI parts that include front and rear spoilers, unique wheels and tS badges make this Legacy appear better balanced and more aggressive, even if the designers could have gone further still. The STI theme continues inside, with logos on the speedo, steering wheel, gearknob and red-stitched leather seats.

So where are the main mechanical revisions? Not in the drivetrain. The 282bhp 2.5-litre turbo flat-four is unchanged, as is the choice of a six-speed manual or a five-speed slushbox (we’d take the precise-feeling manual). That said, with an STI exhaust fitted, the boxer burble does sound raspier and meaner.

The full STI handling package means that the tS, which comes in both saloon and wagon variants, is fitted with STI’s unique inverted Bilstein struts and stiffer springs all round. The 18-inch wheels are shod with Bridgestone Potenza rubber, while more negative camber improves grip and cornering limits.

But the critical part that brings the whole package together, according to Tatsumi, is the ‘flexible tower bar’ that the company has spent three years perfecting. Connecting the tops of the front suspension struts yet boasting a flexible centre joint, it’s like the Holy Grail of suspension parts, giving the tS more rigidity through the corners, better feedback from the steering and no understeer, but also soaking up road imperfections and providing a better, more compliant ride than a solid bar.

Put back to back with a stock 2.5-litre Legacy, it’s blindingly obvious just how precise and responsive the tS’s set-up is. With the flexible tower bar as its secret weapon, this Legacy’s suspension resists initial body-roll on turn-in, which keeps the car flatter through the corner, while the rear end follows the front with uncanny precision. It’s simply superb.

With the tS, STI wanted to show that tuning does not have to mean more power, and Tatsumi and his team have succeeded in doing just that. It’s just a pity that the tS will only be sold in its home market. But all is not lost. One Subaru insider revealed that the company is considering offering the suspension upgrades, including that tower bar, as options in the UK in the not too distant future. Oh, and you can look forward to these parts being offered for the Impreza and Forester too.