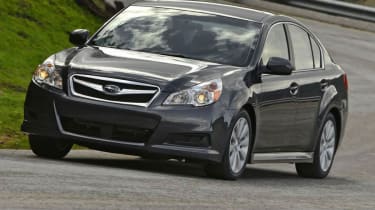 Subaru has released details of the new 2010 Legacy a few days before its official debut at the New York International Auto Show. The car’s design will be recognisable to those who saw the Legacy concept at the Detroit Auto Show but unfortunately, a few of the car’s more attractive features, such as the LED lights, have been replaced for the production car.

The familiar boxer engines from previous Legacy incarnations return with the naturally aspirated 2.5i which produces 170bhp and 170lb ft of torque. There’s a choice of six-speed manual or the new Subaru Lineartronic CVT, which uses steering wheel paddles to shift gears. Next up is the 2.5GT turbo, which boosts power to 265bhp and pushes the torque to 258lb ft with only the six-speed manual transmission available. Lastly is the 3.6R, which produces 256bhp and 247lb ft of torque and is available only with a five-speed automatic gearbox. Subaru claims that either transmission will give faster acceleration and lower fuel consumption over the 2009 Legacy.

The all-wheel-drive system from older Legacy’s returns but the suspension has been slightly modified. The front keeps the Macpherson type strut setup from the older model but the rear gets a new double-wishbone setup. Subaru claims that this will give the new Legacy a better ride with improved stability and handling.

The new Legacy is 35mm longer, 90mm wider and 80mm higher than the old model making it nice and roomy. The previous Legacy was praised for its responsive handling and these new larger proportions could have an adverse effect on overall performance. On the other hand, the extra four inches of legroom created by the larger dimensions coupled with a few premium touches like in dash sat-nav and ten-way adjustable driver’s seat give the Legacy a touch of class so familiar to the rival BMW 3-series. But with prices set to start at around £20,000 the Legacy may struggle in sales against its more handsome, more desirable and similarly priced German competitor.

With Subaru sales in the US looking pretty healthy at the moment, it seems as though the Legacy is geared more towards the American market. Bigger engines, a larger size focused more on comfort over performance and a New York debut should help ensure good sales of the Legacy in the US. As far as we’re concerned 2-litre petrol and diesel engines should be added to the line up when it reaches Europe later this year.

Come back to evo.co.uk next week for updates from the New York motor show, something we shall also be Twittering from…