Subaru has unveiled the Advanced Tourer concept at the 2011 Tokyo motor show, giving a first impression of the look of the new Legacy 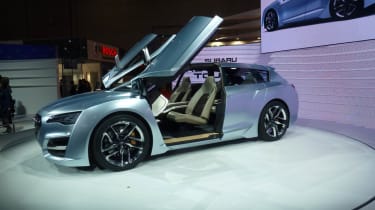 The Advanced Tourer was a smart looking thing, and although its four (yes, four) gullwing doors were just motorshow dressing, it’s reportedly close to the look of the next Legacy. It’s powered by a 1.6-litre turbocharged Boxer engine with drive delivered to all four wheels via a new CVT gearbox system. Subaru claims the new powerplant – which will appear in the production car – matches the power of a naturally aspirated 2.5-litre boxer while boosting economy substantially.

The S206 is a Japanese-only model, and effectively a last hurrah for the current generation Impreza STI – the next-generation Impreza was being shown right next to it (and definitely not benefiting from the comparison).

The BRZ racer has been built for Japan’s Super GT regs, meaning we won’t see it in Europe in this form, with a huge air intake and a big carbonfibre splitter. It looked the absolute business on the stand – and it was hard to argue with the distinctly ‘Jenglish’ slogan it wore across its bonnet: ‘PROUD of BOXER!’