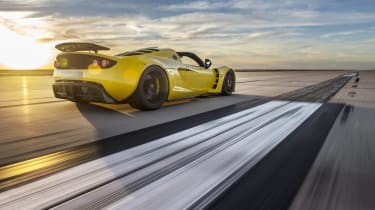 The Hennessey Venom GT Spyder has achieved a world record 265.6mph top speed. The record breaking number was officially confirmed by RaceLogic and took place at a 2.9-mile long runway at a US Navy base in Lemoore, California.

That figure puts the Venom GT Spyder's record ahead of the Bugatti Veyron Super Sport Vitesse, which previously managed 254mph.

The GT Spyder used featured a revised and updated 7.0-litre twin-turbo V8 which produced 1451bhp. That puts the new Spyder's powertrain 207bhp ahead of the previous iteration and translates to a reported 0-60mph time of 2.4 seconds. 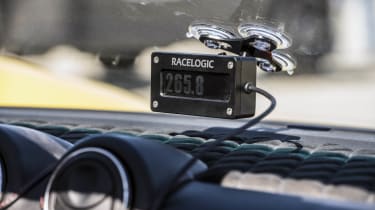 Hennessey says it will produce three of the cars to celebrate the record breaking run, each one priced in at over £1 million.

Previous attempts at record breaking by Hennessey Performance saw the Guinness Book of World Records disallow a top speed run by the Venom GT Coupe, as it didn't complete the run down both directions of a runway. Still, the Coupe did achieve an incredible 270.49mph. Thanks to rules and regulations though, the Bugatti Veyron Super Sport retained the world record title with its 267.7mph top speed.

Hennessey's next-generation Venom, called the F5, is already making bold claims. The Texas-based tuning shop is claiming a potential 290mph top speed as well as in excess of 1400bhp. That will pit the car directly up against the 1479bhp Bugatti Chiron and 261mph top speed.

Hennessey recently released a film detailing exactly how it broke the world record with its GT Spyder. Watch it above.

evo's Richard Meaden visited Hennessey Performance back in 2013 and drove the Venom GT Coupe back in its 1244bhp form. You can watch that video below.