World’s most powerful street-legal Ford not enough for you? Meet Hennessey’s take on the new Shelby GT500 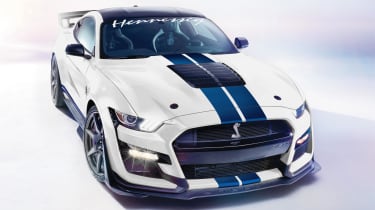 Hennessey Performance is no stranger to pumping more power into cars that almost certainly don’t need it, and it’s playing its usual game with the new Shelby GT500. Three uplifted power levels are available to choose from, ranging from a measly 850bhp all the way up to a mind-boggling 1200bhp.

The engineers at Ford Performance took parts from the current Ford GT and utilised years of expertise to extract already-impressive outputs of 749bhp and 625lb ft and torque from the latest GT500, making it the most power road-legal Ford ever produced. However, before the first customers have even taken delivery of their cars, Texan tuner Hennessey has decided that the GT500 needs as much as another 451bhp, bringing the total to 1200bhp – that’s more power than a Bugatti Veyron Super Sport…

In standard, 749bhp form, the GT500 will cover the 0-60mph sprint in 3.5sec and go on to in excess of 200mph. If the Hennessey versions can successfully get their power down, we suspect those numbers might see some revision... 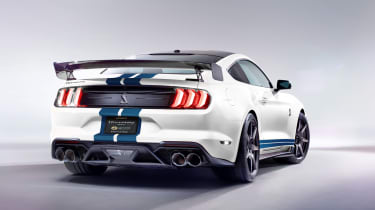 Modifications for the 850bhp, 725lb ft Venom 850 package include the addition of long-tube headers, high-flow catalytic converters, upgrades to the factory supercharger, a new induction system and plenty of badges to ensure nobody makes the mistake of assuming you’re driving a mere 749bhp Shelby Mustang.

Pricing and availability hasn’t yet been announced.