A bright yellow taster of the second generation Suzuki Swift Sport. The S-Concept lands at the Geneva motor show. Pictures and video here 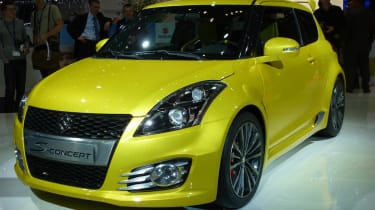 Suzuki has used the 2011 Geneva motor show to unveil the Swift S-Concept, a rather tasty preview of the mk2 Swift Sport. It’s a car with much to live up to – the current Swift Sport is one of the best warm hatchbacks on sale.

The front-engine, front-drive Swift Sport carries on with a 1.6-litre petrol engine and a manual gearbox, though the latter boasts six speeds rather than five, hinting at extra power and performance over the 123bhp car it replaces. An extra ratio should improve economy and emission figures, too.

The S-Concept whets our appetite further with its styling. The body is lower and a whole 60mm wider than the standard Swift, while there are pumped up bumpers and side skirts, a wild rear wing and sizeable 18in alloy wheels. Expect the latter two features to be smaller and more toned down come production time, but we’re hopeful the rest of the car’s looks remain intact. The ‘Lightning Pearl Yellow’, black and grey colour scheme is apparently inspired by running shoes.

Things are equally funky (though less footwear-like) inside, with the bumblebee colour scheme repeated on a pair of Recaro bucket seats while there’s a sprinkling of carbonfibre on the dashboard.

It’s a feel-good hot hatch, the Swift Sport, and the S-Concept continues that feeling. We can’t wait to see it make production.