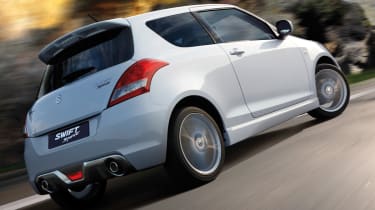 Suzuki has unveiled its new Swift Sport, based on the all-new Swift released last Autumn. Its predecessor is an evo favourite and Suzuki has kept the recipe the same – evolution rather than revolution.

The engine is a development of the previous generation’s 1.6-litre unit. It now develops 134bhp at 6900rpm and 118lb ft at 4400rpm, representing 11bhp and 9lb ft rises respectively. Peak power actually arrives 100rpm later than before, but crucially peak torque arrives 400rpm earlier, which should make the performance more accessible. These increases are achieved thanks to the addition of a variable intake system, optimisation of the intake VVT and increased valve lift. The engine is mated to a new six-speed manual gearbox, replacing the old five-speed, which Suzuki claims has a lighter and more positive shift action. The engine development and new gearbox result in CO2 emissions that are down around 11 per cent, falling from 165g/km to 147g/km. There is also a revised exhaust system.

Handling is set to improve with a whole host of dynamic enhancements. Newly designed rear suspension is said to increase cornering stability at the rear. Increased front and rear spring rates combined with added rebound springs at the front significantly increase stability by reducing body roll, Suzuki claims. Yaw response is also said to be improved. Stability will be further aided by a wheelbase that is 50mm longer (now 2430mm).

Visual changes include an enlarged front grille, finned front fog lamps, twin exhausts and 17in alloys (which save 1kg each). A number of aerodynamic modifications are said to reduce lift. Interior enhancements include a new design of sport seats in an exclusive fabric. Seven airbags and ESP stability control are standard.

The new Suzuki Swift Sport will hit the UK early next year. Prices are yet to be released but expect a small rise over the current model's £12,995 price tag. And if you want to grab an outgoing car while you still can, we've heard of new examples for under £10K...