Teslas latest all-electric answer to practical family transport. Features 'Falcon doors' and will do 0-60mph in less than five seconds... 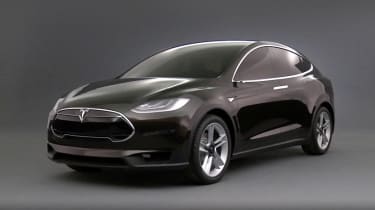 The electric crossover, named Model X, has been unveiled, and the concept seen here will go into production towards the end of 2013. There will be various drivetrain options and configurations on offer, starting with the single-motor rear-wheel drive model, right up to the 'Model X Performance' with dual motor all-wheel drive.

Based around the same platform and drivetrain as the Model S, the X can can 'comfortably' seat seven people, with three rows of seats - its revolutionary gullwing-style 'Falcon doors' allowing easy access.

Tesla co-founder Elon Musk commented that 'It has more room than a minivan, more style than an SUV and more performance than a sports car'. Musk also announced that there is a fourth Tesla model in the works, with more announcements to come in the next two years.