Let’s start with the Performance, because by gosh does it have plenty. Tesla quotes the 0-60 (not 62mph) at 3.2sec – an astounding number, but especially so when applied to a mid-size executive hatchback. The Model 3 Performance accelerates with such aggression it almost hurts. If you make the mistake of stepping into the Model 3 without Sports mode activated, performance can initially feel a little underwhelming. But, select the right acceleration mode, give the motors a little time to warm up and it genuinely catches you off guard.

A standing start is one thing, but it’s the roll-on acceleration that feels almost otherworldly. To say that previous to driving the Tesla Model 3 this journalist had two weeks of two V10 supercars, yet was still blown away by the £50k Tesla, says much. Lesser Long Range and Standard Range Plus models offer the performance their numbers suggest, but all Model 3s feel like they have more than enough performance for everyday driving. Weight figures are typically high, but then perhaps not quite as chunky as some might suspect, explaining the Model 3’s performance relative to its far more powerful Model S sibling. Standard single-motor Model 3s hit the scale at 1645kg, which put into context is about the same as a rear-wheel-drive aluminium Jaguar XE petrol, while dual-motor versions, with their larger battery packs, come in a couple of hundred kilograms heavier at 1847kg. 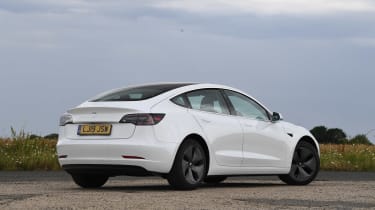