We answer your Facebook questions on the Tesla Model S

The Tesla Model S has caused more debate in the evo offices than most cars. Innovative, unusual and incredibly quick, everyone wanted to sample the most talked about electric car.

Earlier this week we posted a picture of our P85+ test vehicle on Facebook and asked you what you wanted to know about it. Below are the best questions and our answers.

How can this be an evo car? - Nenad Mihajlovic

The Tesla Model S P85+ we tested completes the 0-60mph sprint in 3.9 seconds. This is as fast as just about every other super saloon on the market. That’s the benefit of the instant torque delivery of the electric motor. 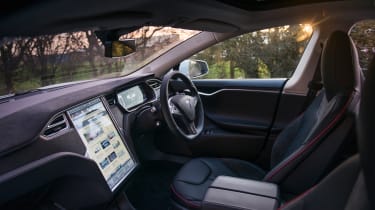 At evo 'the thrill of driving' can take many forms. The Model S might not make the noise of a 458 but it’s certainly fast enough to thrill.

What's it like as a daily driver? Can we expect to see it gracing the Fast Fleet pages please - Alex Merrall

As a daily driver the Model S is very impressive, provided you have access to some level of fast charging. The bottom line is, if the car is parked, it has to be charging, otherwise you start to run into issues with range quite quickly.

What we can say is that on the motorway, it's a stellar cruiser. Aside from a little bit of tyre and wind noise (there’s engine noise remember), it's extremely quiet and refined inside. The new 'Autopilot' driver assistance systems, which help keep you in lane and auto-brake on cruise control, just make it an even better cruiser.

The Model S is a very big and wide car, so in city driving situations, things can get quite tight. It does, however, have an excellent turning circle and all the parking sensors make slow speed maneouvres very easy. 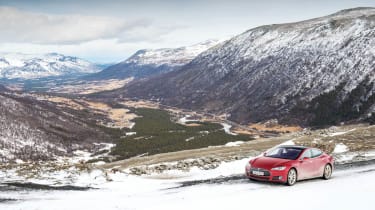 As such, we'd liken daily driving the Model S to something like owning an RS7. Big, fast and with plenty of space, but just minus the fuel bills, provided of course you absolutely stick rigourously to charging it properly.

How angry can it make Stuart Gallagher? - Kyle Fortune

It all depends on how fast you can charge it.

How do you actually charge it while daily driving - without Supercharger stations around? - Michael Grigorev

You can charge the Model S from a standard wall socket, but it will take a long time for you to give the car any sort of useable range – we got 85 miles after 14 hours charging from zero range. As such, we absolutely advise opting for a Type 2 wall connector, which can give out up to 68 miles of range in an hour. 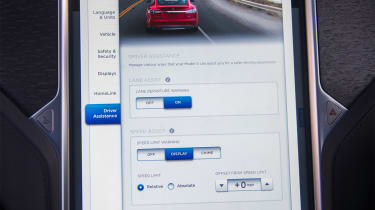 How torquey does it feel? - Olli George

Very, especially when rolling on from 50-70mph. With instant torque it means it pulls very hard and very quickly, think 991 Turbo S.

How green is the electricity that is generated to charge it? - Tim McBeath

This is a hugely contentious topic when discussing electric cars, and a popular question wheeled out by those sceptical of the environmental benefits of such cars.

The answer is that the cleanliness of an electric vehicle depends entirely on where you live and how you choose to charge it. In the UK, electricity is generated largely by coal and gas – around 40 per cent and 30 per cent respectively – followed by around 15 per cent nuclear and other sources in increasingly small percentages. 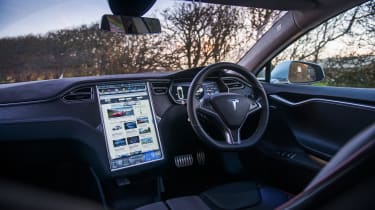 About five years ago, the UK’s energy mix was such that an electric car charged from a domestic charging point produced the equivalent of 189 g/km of CO2 – equivalent to a petrol car averaging 34.6mpg.

That doesn’t sound great, but doesn’t take into account the true well-to-wheels CO2 figure of the petrol car, which can add hundreds of grams of CO2 per kilometer.

Essentially it’s a hugely complicated subject which requires far more space than this to discuss – but ultimately, electric cars are cleaner than fossil-fueled ones (before you even consider non-CO2 emissions). And if you stick some solar panels on the roof of your house, they’re cleaner still.

How much actual mileage can you get from one of those things? - Ian Petrie

250 miles if driving careful. Daily driving with a good charge is realistically between 200-220.

Does the screen turn off or dim at night? - Neil Hitchmough

Yes, it will turn the nav and dash screen dark. You can also set custom brightness in the settings menu to suit what you want.

Can it be driven enthusiastically for fun? - Stuart Grant

Absolutely. You have the added benefit of not having to worry about fuel costs of driving enthusiastically, as a full charge costs in the region of £5. It's a big car, so you do need to be careful down B roads.

Are they as good as our European cars apart from the technology? - Rupesh Patel

The huge 17-inch touch screen tablet dominates the interior. This is more a question that can be answered in our full review, which you can read here. That said, we will say the interior has more of an American feel than you'd expect and doesn't quite have the high quality feel of some competing German brands. 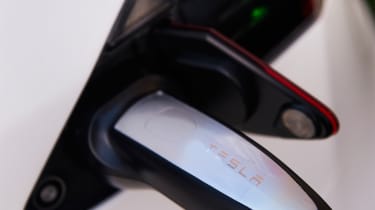 Is it harder or easier to operate the controls (say for the heating) than a conventional car and would you say that it ends up becoming a distraction for the driver? - Rob Parker-Norman

The layout of the touch screen dash is very logical. It's clear and easy to use, plus the sheer size of it also makes things easier to find. That said, it can be slightly distracting knowing you have access to a full web browser when sat in traffic. When driving, it's less of an issue.

Some of the testers were frustrated by having to use the touchscreen to control every function.