Is the huge infotainment screen in Tesla's Model S distracting? We find out 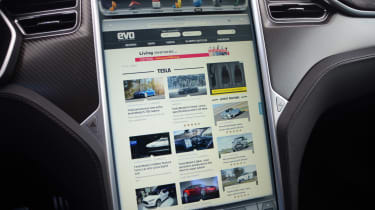 ‘Isn’t it distracting?’ That’s the question most people ask of the 17-inch touchscreen that occupies a vast swathe of real estate on the dashboard of the Tesla Model S P85D.

View the screen in photographs, where inevitably the brightness has been maximised for illustrative effect, and people imagine the output is akin to a console-mounted searchlight. Offputting during the day, positively blinding at night.

The reality is rather obvious. Not only can the screen be dimmed during the daytime, but it automatically dims as ambient light fades. It’s always on, so to an extent there’ll always be a glow in your periphery, but it’s no more a bugbear than the screens in most equivalent luxury vehicles.

And its myriad functions are more than welcome in nose-to-tail Birmingham traffic, which is the setting for our first brief UK drive of the new dual-motor Tesla. As an escape from the tedium of crawling queues the screen is quite appealing, and a permanent 3G internet connection means entertainment is just a few prods of the screen away.

The benefits of a full 17 inches of navigation screen can’t be understated either. Picking routes on the fly couldn’t be easier, and a recent software update allows you to choose a location by simply touching the screen, which is easier, quicker and safer than dedicating attention to entering postcodes. You can do that too if necessary, though, with a full touchscreen keyboard. 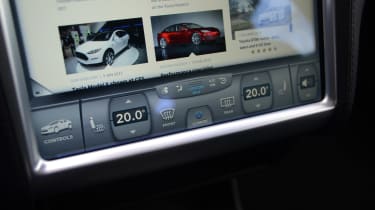 Perhaps most intriguing is that extra functions can appear overnight. Tesla owners are already used to turning on the car in the morning to find a software update has been installed. The most recent update added automatic emergency braking, blind-spot warning (the hardware was already in the car) and an improved trip planner that routes via Supercharger fast-charge stations.

There’s also a Valet Mode, which limits speed and acceleration, hides personal addresses in the satnav and locks the glovebox and bonnet.

Yet buried within the menus, there’s one small slider that will make you forget about every other function. That slider chooses between ‘Sport’ and ‘Insane’ modes. Choose the latter and the P85D’s full 691bhp output is unleashed along with a McLaren F1-beating 3.1-second 0-60mph time – or 2.8 seconds for those customers choosing the Ludicrous Mode upgrade. Now that’s distracting.

You can read our full Tesla Model S review here.