If you’re completely new to the Tesla Model S then the starting procedure might be a little baffling, leading you to search in vain for a starter button or ignition slot for the car-shaped key. But rather than being inconveniently placed or deliberately difficult to find, there is no ignition or any means of turning the Model S on; it’s simply ready as soon as you climb in. From here, all you do is depress the brake, pull down on the Mercedes-sourced, column-mounted gear selector and then squeeze the ‘throttle’ – perhaps more accurately an accelerator pedal – to pull away.

The lack of engine noise, although slightly eerie to begin with, means that the Model S feels incredibly civilised. Silently wafting down a road just oozes a sophistication that isn’t available on even the most expensive, premium cars. A calm and supple ride complements the quiet cabin, the first hint of anything other than total serenity is some breathy wind noise, but rather than being dominant it’s only really audible because there isn’t any engine noise to help drown it out.

What makes this refinement even more appealing is that, whenever you choose, you can unleash the Model S’s incredible, instant performance. The contrast between such luxury and supercar acceleration doesn’t lose its novelty. 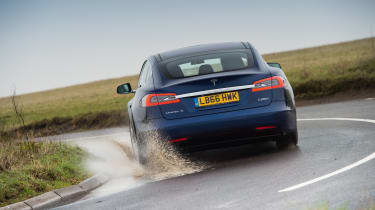 With such a soft ride, and the thought of such phenomenal acceleration figures, you expect the rear end to squat considerably – almost to the point the bodywork might drag on the floor – as soon as you touch the accelerator pedal. But surprisingly, the entire car tenses and the forward thrust remains just that, rather than a force that’s trying to heave the body from the chassis.

This staggering acceleration begins to skew your opinion of what sort of car the Model S is. On thrust alone it’s in supercar territory and it causes you to critique the rest of the car by the same unfairly high standards. But it pays to remember it is still a big, heavy saloon.

With the throttle releasing such savagery, the rest of the controls feel somewhat lacking, initially. They aren’t, though. The brakes, for instance, might not be forceful enough to rearrange your internal organs but they are strong and effective, and should also be commended on how well they cope with intense abuse. The Tesla’s rapid acceleration means you often need to scrub off a lot of speed, and given the novelty of the instant speed never seems to diminish, you need to do so frequently. You’d think that hauling up the Tesla’s 2240kg bulk so often would cause major issues, but the brakes continue to work well.

The brakes need to handle repeated hard work in part because of the cornering style the Model S seems to prefer. Its ability to gain speed means that, no matter how slowly you navigate a bend, you can regain your speed within moments of exiting. It’s easy to get into the habit of slowing down excessively just to accelerate away. 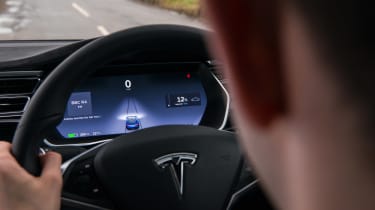 But the Models S is hardly cumbersome through a corner. It turns in with just a small degree of roll and rotates just enough to have you pointed towards the apex at a rather impressive speed. The steering doesn’t send a great deal of detail to your hands, but the Model S transmits enough information for it not to feel completely remote.

Carry a touch too much speed and you do detect a hint of understeer, but it’s fleeting and dealt with by the car before it materialises into anything worrying. The Tesla’s acceleration when exiting a corner is just as impressive as it is in a straight line, and equally without any real hysterics or loss of grip – just a display of incredible traction and grunt.

Despite this, it’s not an easy chassis to take advantage of. Although the controls, the steering, throttle and brakes are good in isolation, they don’t integrate with one another especially well, and that makes it difficult to be smooth and calculated with your inputs. Stepping off the throttle drops the speed excessively thanks to the car’s brake regeneration. With such a dramatic effect on the car, whether forward movement when the accelerator is depressed or significant deceleration when lifting off, it’s tricky to make minor adjustments, and frankly impossible if you want to be smooth. 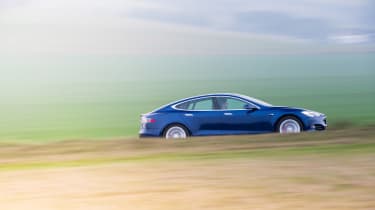 Turning off the regenerative braking (which is very easy to do through the infotainment screen) improves things but it reveals the brake pedal doesn’t have a linear and progressive influence on the brakes.

The Model S is very much a refined and considered saloon car but its supercar-style acceleration isn’t quite matched by the dynamic abilities of the chassis. However, that doesn’t stop it being able to rival some of the best sports saloons on sale now.

If you want to feel the full benefits of the Model S’s massive potential performance, you'll have to shell out for the top-end Performance model with a 100kWh battery – but it’s entirely worth it. Not only do you have 365 miles of range (250-ish miles in real-world conditions) but it’s also capable of a 2.5sec 0-60mph sprint and while maintaining the typical Model S refinement.

‘As a driving experience the Model S pretty much sells itself. Incredibly relaxing yet blessed with tremendous reserves of seductive performance in the meaningful sector of the speedo needle’s arc, it combines the haymaker punch of a supersaloon with an ability to soothe and de-stress that surpasses all but the most luxurious Range Rover or Bentley.’ Richard Meaden, contributing editor, evo 196