An all-new Avensis is on the horizon 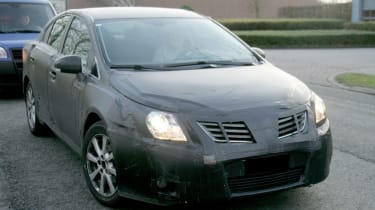 After being on the market for five years, the current Toyota Avensis will be replaced by an all-new model in 2009. Like today’s car, the newcomer will be available as a saloon first with an estate following about half a year later. Though the car photographed is still camouflaged, certain details such as the bigger headlamps and the taillights – split in two parts at the new models – are visible.

Rumours suggest there will be a raised gearshift lever in the Avensis, inspired by the Auris, and a panoramic roof for the estate which is said to be much sportier than the existing version.

At first there will be a range of petrol and diesel engines to choose from, but Toyota is planning to offer the new Avensis as a diesel-hybrid, too, and four-wheel-drive will be on the options list as well.