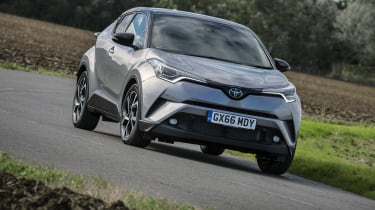 There are three drivetrains available in the C-HR: A 1.2-litre turbocharged four-cylinder petrol with six-speed manual and continuously-variable transmission options, and a 1.8-litre four-cylinder hybrid, again supplied with a CVT.

The hybrid isn’t as unenthusiastic as you might expect, having benefitted from years of development within Toyota to the point that it no longer moos quite as loudly under heavy acceleration, though it’s still not the performance option in the range. Its benefit, of course, is low fuel consumption and low emissions, which have corresponding benefits when it comes to fuelling and taxing the car. 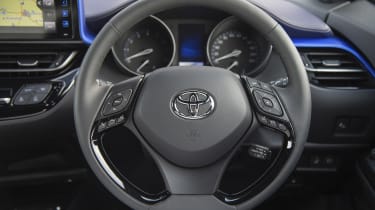 The four-cylinder unit uses Atkinson-cycle combustion technology, which delays closing of the intake valves to reduce the effective compression ratio to extract more efficiency from the combustion process. This reduces power (on its own, the 1.8-litre lump pushes out only 97bhp), but that’s where the C-HR’s electric motor comes in, boosting power and low-down torque for a combined 120bhp.

That’s slightly more than the 1.2-litre (fashionably downsized) four-pot turbo petrol, which develops 113bhp at 5600rpm and 136lb ft of torque from 1500rpm, though the two power units boast nearly identical on-paper acceleration figures. This engine too has a strong focus on efficiency and refinement over performance, using variable valve timing, a high compression ratio, direct injection, and an exhaust manifold integrated into the cylinder head. The VVT system allows Atkinson-cycle running just like the hybrid, though when more performance is called for it can switch back to the traditional Otto cycle.