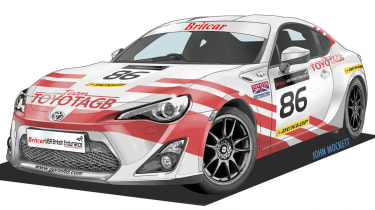 The Toyota GT86 sports car will compete at the 2012 Britcar 24 hours. Silverstone’s round-the-clock race – which takes place in September – is an increasingly popular date on the endurance calendar. The GT86 is the latest familiar shape from the road to receive a Britcar makeover. The 86’s transformation is being carried out by GPRM in Buckinghamshire. While the standard car’s 197bhp 2.0-litre boxer engine is set to remain unmolested, the chassis will be lightened and strengthened and a rollcage, quick-refuelling equipment and all the requisite safety kit will be installed. GPRM is well equipped for the task, having worked on the Toyota Avensis BTCC touring car. An announcement on who’ll drive the Britcar Toyota GT86 will be announced in the coming weeks. The car's livery will echo the one used on its AE86 forebear, which competed in the BTCC in the 1980s. It will join a packed grid – which topped 55 cars in 2011 – on the weekend of September 22 and 23 2012. The 24-hour race takes place on Silverstone’s GP circuit.

We try the new Toyota GT86 sports car on track...