The Tokyo motor show has seen a number of modified and tuned Toyota GT 86s shown. 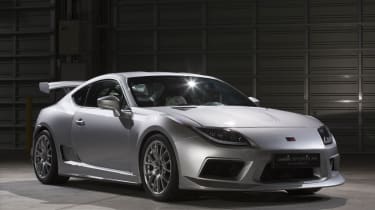 Toyota’s GT 86 is proving extremely popular in the Japanese tuning scene, and this is certainly apparent at the Tokyo motor show.

One of the more subtle packages is the Toyota 86 Modellista, which comprises of side skirts, bumpers, black roof and a spoiler, with slightly lowered suspension and a jazzed-up interior. The engine however, is left untouched.

Another interesting styling package is the ‘86 xstyle Cb Concept’. Totally transforming the front end of the car, the GT 86 gets a much smoother looking bumper, and round headlights – almost reminiscent of the classic 2000GT. Again, the engine hasn’t been upgraded in any way, although it does feature uprated Brembo brakes.

Gazoo racing has introduced a new performance package (main image), which thanks to the addition of a small supercharger and turbocharger, raises power of the GT 86 from 200 to 325bhp. To help put its power down, the suspension and brake packages have been uprated, and a new mechanical limited slip differential has been fitted. The car gets a full bodykit, and inside there is a full roll-cage and race seats.

At the more extreme and of the scale, there is the TRD Griffon concept. This is a pure racer, with carbon fibre reinforced plastic (CFRP) bonnet, tailgate, bumpers, roof, doors and wings, which has been stripped out and reinforced for track use. All the weight saving adds up to a reduction of more than 200kg.