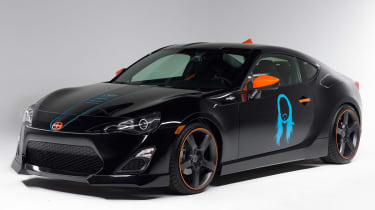 SEMA is well known as the tuning nirvana of the car world where petrolheads from around the world meet in Las Vegas to show off their latest creations. Here are some of the most interesting cars that will be appearing this year:

Scion, the more youthful arm of Toyota in the USA, created a competition in which a handful of tuning companies tried their hand at creating a cool and unique Scion, to be showcased at SEMA. The winners were three young designers who's cars were not only completed on time and to a high standard, but didn’t look the slightest bit alike.

The first model to be chosen as a winner was a bright orange Scion tC by car tuner Josh Croll, owner of Croll’s customs in Pennsylvania. The striking car runs a heavily modified turbocharged four-cylinder, which boasts 324bhp. One interesting modification is the cut-off exhaust, which pokes out of the bonnet.

Young Tea – a fabricator from California was responsible for the second winner, which he christened – Simpli-tC. Being the co-founder of the Scion FR-S fan club, Tea has a great knowledge of how these pocket rockets work and so has created a highly tuned Scion tC. Teal-coloured paint, a wide body kit and hunkered down stance give the tC a futuristic look.

Finally comes Walter Francos take on the Scion. The Seattle Art Centre College Design graduate draws inspiration from car culture from around the world – most notably Tokyo’s VIP scene. Bright white paint creates a clean and pure look and the addition of subtle body alterations make this tC less visually explosive and give it more of an air of reserved cool. With a nitrous system boosting engine performance Walter’s Scion ticks all the boxes for an all round performance car.

There will also be a selection of GT86s (Scion FR-S in the USA), which have received varying degrees of modification. The Steve Aoki x Scion FR-S comes with a fully operational mixing station; Bulletproof FR-S Concept One takes things to extremes with a wide body kit and 500bhp engine; GReddy Performance x Scion Racing Drift FR-S also has a body kit and 750bhp 2Jz-GTE engine; and the FR-S ‘Style J’ is a rather more low-key affair with a custom leather interior.