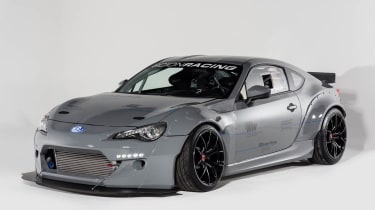 The Toyota GT86 has been modified for the SEMA show. The headline car tuning show is taking place this week in Las Vegas, and the Scion FR-S (as the GT86 is badged in the US) has had a lot of tuner attention.

Four Scion FR-Ss are starring at SEMA. Most startling is the GReddy Performance x Scion Racing Drift FR-S (grey car, main image). As well as having one of the longest concept car names in existence, it also has 750bhp – that means a rather unsubtle 380 per cent increase on the standard car, which uses a 197bhp 2-litre flat-four engine. A power output higher than a Ferrari F12’s should be more than enough to cut the driven rear axle loose and live up to its ‘Racing Drift’ name, while there’s a ‘Rocket Bunny’ aero kit to make sure its looks possess similar levels of attitude.

Less potent, though still tuned heavily over standard, is the Bulletproof FR-S Concept One (white with black bonnet, right). It has a 500bhp turbocharged engine, track-tuned suspension, a handmade, widened body and a carbonfibre interior.

The Urban GT Sport Coupe (grey, right) gets a custom leather interior and a very clean exterior look, including de rigueur concept car equipment, wing mirror-replacing cameras. Finally the Steve Aoki x Scion FR-S (black, right) takes its name from the DJ who was apparently designed it, and as such boasts a mixing station, a Pioneer sound system, a fog machine and strobe lighting.