Of these two affordable rear-drive sports cars, which one really hits the spot? 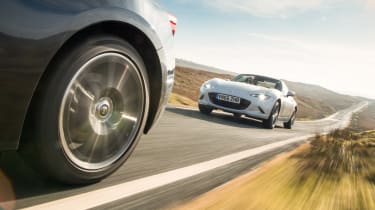 Refreshment comes in many forms. Last night’s cold pint in the Y Pengwern guest house certainly met the criteria. The gale-force weather in north Wales this morning is refreshing, too, albeit less welcome as it tries to strip the hat from my head and turns evo photographer Aston Parrott’s tripod into something from an HG Wells novel. Also being battered by the weather are two rear-wheel-drive, naturally aspirated sports cars with manual gearshifts and small footprints. Paddling alone in a sea of turbocharged hot hatchbacks, there’s something very refreshing about both of them.

In the grey corner is Toyota’s GT86, recently facelifted to mixed effect and still powered by a 1998cc boxer unit with a power figure just shy of 200 horses. Its crisp white opponent is the Mazda  MX-5 RF – not, as the roofline suggests, a coupe, but a ‘retractable fastback’. Think 991-generation 911 Targa in both concept and execution, or early-’90s Honda CR-X Del Sol if you’re feeling cruel.

But I’m feeling kind. The RF looks great, just as chiselled and just as minimal of overhang as the roadster, but a little less toy-like. Mazda has discovered that MX-5 hard-top buyers leave the roof up more than their canvas-roof counterparts, so its designers put extra effort into the styling. They may be on to something, though I can’t help feeling a proper fixed-roof coupe, with an F-type-style tailgate rather than XJS-style buttresses, would look even better.

The ’86 isn’t quite as slick. The proportions are great, better than the Mazda’s, with a low bonnet and more rakish roofline, but the details aren’t so hot. The new front bumper gives the car a toothy underbite like Muttley’s and while the rump is improved – gone are the glitzy 2001-era Lexus-style lights, and the absence of a spoiler on the base-spec car keeps things clean – the Toyota looks both under-wheeled and over-sprung, like someone has forgotten to remove the shipping spacers.

Mazda’s focus on style continues inside. The latest MX-5 has a minimalist cabin but not at the expense of useability, with a simple infotainment system and proper rotary dials for controlling ventilation. All the controls feel close and the dashboard and door-cards sweep around you like ribbons of silk. If you’re tall, some aspects might start to grate: the seat is a little too high, the wheel only adjusts for rake and the buttresses make the cosy cabin a little claustrophobic, but the relationship between wheel and gearlever is as close as such things get and your feet tread pedals placed almost perfectly for heel-and-toe gearchanges.

> Click here for our review of the Toyota GT 86

If Mazda’s engineers thought hard about control placement, then Toyota’s have obsessed over it. Here you sit lower, peering over Toyota’s own interpretation of a three-spoke steering wheel, but there’s more adjustment so you can put that wheel exactly where you need it. The seat feels more accommodating, too, the cabin more spacious, and the pedals somehow even better aligned than those of the Mazda. So what if there are a few nasty plastics about? This has always been the case with Japanese cars, and an Integra Type R or Nissan GT-R is no less of a drivers’ car because of it.

I chose the ’86 for the drive to Wales and became smitten with it all over again. Not at first though, thanks to Toyota’s insistence on fitting low-grip Michelin Primacy tyres to its sports coupe. I’m all for cars that move about underneath you, but the GT86 can feel nervous in quicker corners even if you’re not pushing particularly hard, as if the rear tyres are planning on breaking free, while in slower ones the front end can wash wide surprisingly early.

Not a great first impression, but stick with it and things improve. The GT86 does have grip, and it’s when you start to lean on them that the tyres make a little more sense. The steering starts to feed back messages as soon as you start applying lock. It’s no Elise-style chatterbox but there’s enough information there to let you know how much you can exploit the front end. Toyota hasn’t clouded this feedback with weight either, so the ’86 always feels light and nimble.

As you trust the front end, so you begin to bring the rear into play. The GT86 corners flat, far more so than the Mazda, so things begin to happen as soon as you’ve loaded up the chassis. And yes, sometimes there’s a touch of understeer, but, once you’ve identified this through your fingertips, you need only relax your toes to balance the chassis. From that point, with the front and rear tyres sharing equal load, you can feed in more power and tighten your cornering line with the rear wheels. It’ll do this around virtually any corner, and while that outright lack of grip means an average hot hatch would soon be several turns ahead, it’s deeply satisfying to string together a sequence of bends, the Toyota seemingly on tip- toes, always a throttle movement away from a few more degrees of rotation.

The Mazda takes a different approach to cornering. It wears slimmer rubber – 205/45 R17s to the Toyota’s 215/45 R17s – but its Bridgestone Potenza S001s generate significantly greater cornering forces than the Prius-spec Primacys. They seem to claw into the surface, letting you lean harder on the front end and allowing you to jump on the power sooner on the way out. Around any given corner it’s quicker than the Toyota. And yet…

Joining straights in the RF always requires you to work through a degree of imprecision and softness. The steering rack itself is as direct as that of the Toyota, but its off-centre response isn’t as keen, and until you’ve put an eighth of a turn into the wheel there’s little indication as to what the front tyres might be doing. During this phase the body also begins to lean, forcing you to wait just a moment longer to discover how much you’re testing the tyres. The chassis certainly meets Mazda’s brief of making you feel like you’re pushing the car hard, even when you’re not, but when you’re actually pushing the RF hard it never feels quite as composed, or as immediate, as the Toyota.

This softness also means that the Mazda struggles when you introduce undulations or sudden bumps into the cornering process. Where the Toyota absorbs a compression, leading to one body movement and then regaining its composure, the Mazda tends to bounce and skip. Bumps also cause a shudder through the structure, even with the roof in place – something the stiffer Toyota shell handles with aplomb. With more grip, the Mazda isn’t going to sling you into the undergrowth (though the significant weight transfer could cause clammy palms when the road is wet) but it all adds to the impression that the RF enjoys a slightly gentler pace of life. Which, given the Mazda’s ability to walk away from the GT86 in a straight line (yes, really), seems like a missed opportunity.

The RF is 39bhp down on the GT86, at 158bhp plays 197, and it has slightly less torque too, producing 147lb ft to the Toyota’s 151lb ft. But three things count in the Mazda’s favour. Firstly, its peak outputs are developed lower down the rev-range than those of the Toyota – considerably so in the case of torque, with the GT86 starting to produce maximum twist just 600rpm shy of its power peak.

Secondly, Mazda’s tireless efforts to cut weight allow the RF to undercut the ’86 by nearly 200kg, despite the extra hardware sitting on its rear deck. And finally, the MX-5’s 2-litre in-line four is simply more enthusiastic and punches through snappier gear ratios than the GT86’s Subaru-sourced boxer engine.

The Toyota’s engine is responsive and fun to wring out, shedding its industrial low-revs chunter for an unusual flat-four note that has the tone and pitch of an old Impreza but played at 150 per cent speed. The gearbox is fantastic, too, snapping precisely through the gate with as little movement as the Mazda’s famously crisp shift, despite a lever seemingly twice as long. But unless you use all the revs, all of the time – a frankly unrealistic scenario on public roads – the Mazda’s meatier torque curve and stronger traction sees it pull whole car-lengths on the exit of every corner. The Toyota gains a little back on the way into corners – it has fantastic brake pedal feel and that confidence-inspiring turn-in feedback – but across the Welsh countryside the RF finds easy pace where the GT86 requires maximum driver commitment.

Unsurprisingly, it’s the Toyota that delivers the biggest grins when you begin to play in the corners, thanks largely to its Teflon tyres. The same body control that keeps it flat through bends and resists movement over craggy tarmac allows it to take an attitude sooner than the Mazda. Ensure you’re in a low gear, jump on the power early, and the rear tyres carve a smooth, progressive arc.

The quick, accurate steering makes it easy to catch, too, just as it does with the Mazda, though the car from Hiroshima always feels a little scrappier than its compatriot from Gunma. It takes a little more effort to loosen the RF’s rear axle, despite its broader powerband, and the body roll seems to add a little more momentum to every sideways movement, so you need to be quicker with the steering.

The Toyota GT86 is the better sports car. It struggles to match the MX-5 for pace but, equally, it isn’t a ‘slow’ car, and there’s great pleasure to be had engaging with the drivetrain. It also feels the better-made product, puts you in greater touch with the action and has a greater depth of ability, from its feedback to its willingness to raise its game when you raise yours.

The Mazda is a grower. Stay within the limits of its chassis and it’s a whole lot of fun to drive, the exaggerated body movements giving it a playful feel and the extra grip giving it higher cross-country pace. It also looks great inside and out, costs less to buy, averaged a remarkable 40mpg over the course of our test (10mpg more than the Toyota) and, with its folding roof, will appeal to some buyers in a way the coupe-only GT86 cannot match.

Roof-down on a rare sunny day in north Wales, the Mazda is an invigorating car, with a punchier engine, rortier exhaust note and theatrical body movements, but I suspect many reading this will prefer the Toyota’s precision, composure and greater focus.

But if Mazda one day decides to make a tin-top MX-5 with a stiffer structure and a firmer chassis, that would be most refreshing of all.