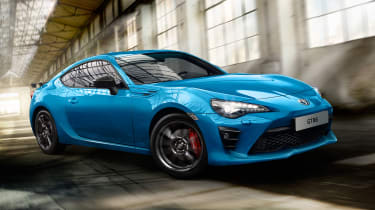 Toyota has revealed the new GT86 Club Series Blue Edition. It comes complete with a raft of visual touches to mark it out from lesser trims. However, it’s the optional performance pack with running gear upgrades that’s the big news. Orders are now being taken; prices start from £29,980.

To develop the optional performance pack – which adds just £475 to the price – Toyota called on Brembo and Sachs to deliver better brakes and a sharper chassis, respectively. Not only do the bigger brakes, denoted by red calipers, bring more stopping power, but Toyota claims they also offer greater pedal feel.

Sachs has been called in to tune the suspension and fitted its own dampers for good measure – changes that make for a more focused driving experience, according to Toyota. The performance pack can be applied to a manual or automatic car, while the powertrain goes untouched.

Aesthetically, the makeover follows the precedent set by the preceding Club Series Orange Edition. To that end, a blue paint finish is contrasted by black exterior trim elements, from the front grille, rear spoiler and diffuser, and door mirror housings, to the front fog light surrounds; brand-new ten-spoke alloys adopt the same colour finish. Inside, there’s a combination of black leather and Alcantara.

The automatic models with and without the performance pack are priced at £30,455 and £31,795 respectively.