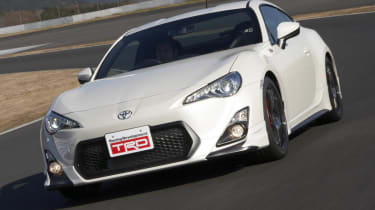 Toyota’s got a wealth of concepts at the 2012 Tokyo Auto Salon stand, some of them quite zany. They’re the work of well-known tuning brands which specialise in Toyota produce. Unsurprisingly, the tuning fraternity is already in raptures with the new GT 86 rear-drive coupe. Two tweaked versions appear at the show. TRD’s version (main picture) gets a reworked suspension setup, with new front and rear anti-roll bars, a carbon front strut, a rear diffuser, additional cross-bracing and a more open exhaust system.  There’s also a visual makeover, with satin white pearl paint, 18in alloys and a butcher body kit. Modellista has also given the car a styling spruce-up, its GT 86 gaining a bold new side strip. Toyota will also compete at the 2012 Nurburgring 24-hours with a race-prepared GT 86, pictured in development, right. Other highlights of the stand include a supercharged iQ city car by GRMN. Forced induction sees its tiddly 1.33-litre engine produce 128bhp and 133lb ft – up from 97bhp and 92lb ft – enough to endow the sub-ton car with the same power-to-weight ratio as a Peugeot 306 Rallye. It gets a close-ratio six-speed manual gearbox, upgraded brakes, sports suspension and a tuned exhaust. And perhaps surprisingly, there’ll even be a 100-strong limited production run. GRMN has also stuck a turbocharger in the new Yaris (or the Vitz, as the Japanese market knows it as). The Vitz Turbo Concept boasts a blown 1.5-litre engine with 178bhp – the same as a Polo GTI and enough to compete in the current small hot hatch class – as well as sharpened suspension and brakes and 18in alloys. There are a couple of interesting electric cars, too. The Toyota Auto Fan Club has built a solar-electric powered version of the lovely 2000GT sports car of the late 1960s, while the Toyota Engineering Society have put together the far more modern-looking TES-ERA EV coupe (in blue, right). The Tokyo Auto Salon takes place this coming weekend, and we can expect a host of other mad and interesting stuff to appear from other manufacturers and tuners.