Toyota has been to the Nurburgring in the Prius plug-in hybrid, setting a lap record of sorts. Details and pictures here 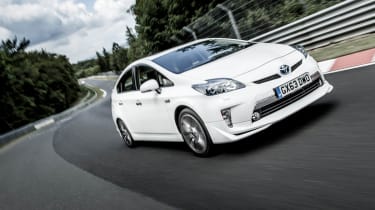 Toyota has set a new record at the Nurburgring by completing a lap with average consumption of 698mpg. Requiring less than five tablespoons of petrol to complete the 12.9 mile lap, the plug-in hyrbid hatchback is the first car to set a record for economy at the notorious ‘Green Hell.’

Risks were certainly lower than the usual high speed ‘Ring attempts, because the Prius averaged just 40mph across the length of the lap, only just exceeding the 37mph minimum enforced for safety. It crossed the line in 20mins 59secs, more than 13mins slower than Toyota’s EV P002 laptime set in 2012. But in doing so, the Prius achieved an mpg figure that dwarfed the claimed 134mpg figure.

The car did feature a few TRD modifications, but all of these were made to improve the car’s appearance and actually had no effect on performance. That meant the standard 1.8-litre petrol engine and electric motor gave the car just 99bhp, though for most of the lap a significant amount less was required as the electronic motor worked without any form of assistance.

The car’s driver, motoring journalist Joe Clifford, believes the car could have completed the lap on full electric power alone had it been on a less challenging circuit. ‘The difference here is a rise and fall in elevation of around 1000 feet. In fact it was only on one long climb that the petrol engine cut in, and then only for a short while. Without that, we think we might have even achieved the ultimate 999.9mpg read-out - the highest figure the display can show.’

Whilst most commutes don’t involve travelling along the unrestricted tarmac of an ex-GP circuit, they are often between 10-15 miles in length. It’s for this reason Toyota believes the record is of significant importance, because it proves you can drive the Prius to and from work with truly lunar levels of fuel economy.

Though this doesn’t account for the fact most commutes also include rush hour traffic jams and far less eco driving styles, it does at least demonstrate the strengths of the rechargeable lithium-ion battery often found in new hybrid road cars.