Does strong work with its modest power figure, taking only 4.3sec to reach 62mph. Feels as quick as the figures suggest 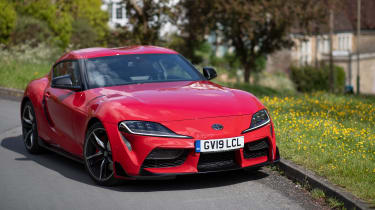 Like its predecessor, the current Supra will quickly develop a reputation for straight-line speed. Its 1495kg kerb weight is hardly flyweight, but 275-section rear tyres make for good traction and the car whips to 62mph in 4.3sec – six-tenths quicker than the 0-60mph time quoted of the old Supra Turbo with a manual ’box, for reference. Top speed is electronically limited to 155mph.

The way it goes about achieving that speed feels… well, quite BMW-like. There are worse engines to listen to than a straight-six, even a turbocharged one, but the engine and transmission’s character are both very BMW, whether mooching around at low speed or gunning it through the gears. 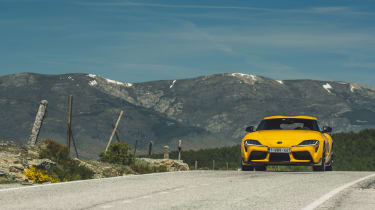 Toyota has worked to give the car some aural character, and in the sportier driving modes there are the obligatory crackles when backing off the throttle. And seat-of-the-pants it feels comfortably as quick as the 0-62mph time suggests, punching hard from very few revs and the acceleration never really tailing off until you bump into the limiter. It responds well in-gear too, taking off with the merest hint of throttle input.

Perhaps it’s a symptom of the low-set driving position or the minimal glass area but it seems to accentuate the car’s performance too – there’s a proper muscle car vibe. It’s a shame, though, that there’s not a manual transmission to add to that feeling.

It’s one of several areas the car feels short on interaction, as good though the ZF is, it’s not as sharp as the dual-clutch ’boxes offered elsewhere, and the process of switching the car into sport mode, knocking the gear shifter into manual and then changing down half a dozen gears just to wake everything up feels neither efficient, nor fun or interactive.