Richard Meaden has been daydreaming again, this time about a TVR 420 SEAC that he's found through evo's Motormutt used car search engine 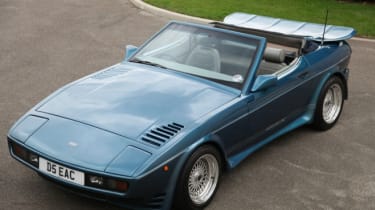 With the UK weather transitioning straight from winter to mid-summer I’ve found myself daydreaming about sports cars, more specifically TVRs.

I really miss the raw and raucous cars from Blackpool. There was never anything quite like them when they were in production, and sadly it doesn’t look like anyone is going to fill the territory Peter Wheeler’s outrageous machines once called their own.

Still there are plenty of good used TVRs out there, as evidenced by the assorted Sagaris, Tuscan and T350s I sniffed-out with Motormutt. Still you can imagine my joy and surprise when my eyes fell on this fabulous and exceptionally rare 420 SEAC, which was built between 1986 and 1988. Those older readers amongst you will remember the significance of the SEAC. Offically the initials stood for Special Equipment Aramid Composite, in reference to its highly advanced Kevlar bodywork (a world first in a production road car) that saved 90kg over the regular TVR 390 SE’s glassfibre bodywork. However within the factory the SEAC was known as the Sausage Egg And Chips!

Powered by a special 4.2-litre version of the Rover V8 the 420 SEAC’s motor was good for a solid 300bhp; enough to propel it to 60mph from rest in under 5sec and on to a top speed of 165mph. Those were serious figures in 1986. Just as impressive was the SEAC’s truly sensational soundtrack, which was more than a match for its arresting looks.

This particular example – one of the first four to be built in a run totally just 37 cars - was made for Peter Wheeler himself. Production difficulties with the hi-tech bodywork meant only the first 8 or 10 cars were clad in full Kevlar panels, so together with the significant first owner this car is rightly regarded as the ultimate SEAC.

Advertised by self-confessed TVR nut Amos Roney, the asking price for this very special wedge of TVR history is ‘on application’. Suffice to say having spoken to Roney about the car it’s clear it’ll take a very serious offer for him to part with it. Quite right too, for this is one very special sports car.

If you want to look for your own dream performance car then check out Motormutt here, or click on the 'Cars for Sale' tab anywhere on the site. You can see the original listing for the 420 SEAC here.