It’s still here, and it’s more enjoyable than ever 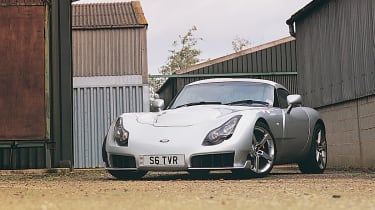 It was with a sense of resigned sadness that we absorbed the news of TVR’s closure. The writing had been on the wall for months, we said. Job losses, management changes, falling sales and a mysterious owner with uncertain motives all pointed to a sad but inevitable end to Britain’s most exciting and nonconformist car maker.

Then we had more news. Apparently TVR’s death had been greatly exaggerated, and though production at the factory in Blackpool had ceased, the company would live on, with production shifted to Italy and engines developed by a highly regarded British specialist to comply with Euro V legislation. While still extremely sad for those facing redundancy in Blackpool, solace could be taken from the bigger picture: TVR would live on.

By sheer coincidence, in the midst of this tumult we had a Sagaris booked in for assessment. At first we thought it would be cancelled, but no, the car would be delivered so that we could see the direction in which TVR was heading. And no, it wasn’t sideways for the nearest apex.

In the old days, a revised TVR usually meant a faster, louder, meaner TVR. As a diversionary tactic it generally worked a treat, for you’d never hear a loyal TVR customer complain about more power for fear of his sexuality being drawn into question. However, newcomers to the brand, those vital ‘conquest’ customers used to the quirk-free functionality of Porsches and BMWs, were finding TVR’s flaky finishing and wonky ergonomics as off-putting as the performance was overwhelming.

So instead of reporting on a sexier, more savage Sagaris, I’m here to tell you about things like washer jets fixed to the scuttle instead of floppy rubber tubes lashed to the windscreen wipers; supportive Sparco seats that don’t wobble during hard acceleration, braking or cornering; new floor-hinged pedals made with a curve so that you don’t have to overextend your ankles to fully depress the clutch or accelerator; tailgate glass with a beautiful alloy latch instead of a recess designed solely to pinch your fingers; rear-exiting exhausts that spit and pop but don’t resonate; and bodywork that doesn’t act as a trap for every leaf, granite chipping and errant cigarette butt. The list goes on.

Do people buy a TVR for its ergonomics? Of course not. But doubtless there are those who don’t buy a TVR because of its ergonomics. It’s this line of argument that the new management is applying. It’s all very un-TVR, but addressing long-standing quality, comfort, ergonomics and functionality issues are what the cars – and many of the customers – have been crying out for.

Naturally, a TVR wouldn’t be a TVR without blood and thunder performance, something the Sagaris remains eminently capable of delivering. The familiar straight-six is as guttural as ever, and while the 400 Blackpudlian horses feel slightly smaller than their Bavarian counterparts, the Sagaris is still a formidable tool to work with on typical British A- and B-roads. The chassis, without doubt TVR’s best to date, is quick-witted but more forgiving than you’d think, and while you need your wits about you to compensate for the lack of ABS, traction control and other modern accoutrements, it’s a pure, challenging and invigorating experience. Business as usual, then.

Improving but not sanitising the product is a fine line to tread, for quirkiness is a definite TVR trademark. However, if our experience of the subtly but effectively revised Sagaris is anything to go by, polishing out a few of the flaws frees you up to enjoy the driving even more. 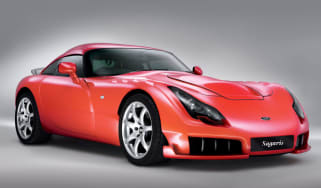 Rights to produce new cars wearing the TVR name, and parts have been sold to a British entrepreneur.
Visit/tvr/sagaris/6237/tvr-sagaris-buying-guide 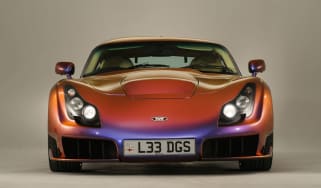 It was the last TVR, and arguably the best car the company ever made. Still highly sought-after, it’s a safe place to put your money, but what should …
Visit/tvr/sagaris/12076/tvr-model-range-returns-for-100k-each 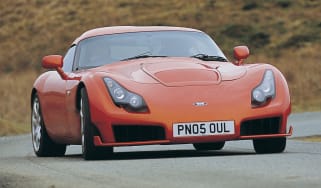 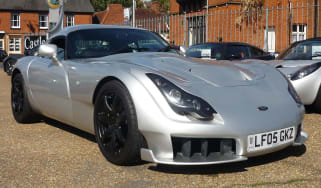 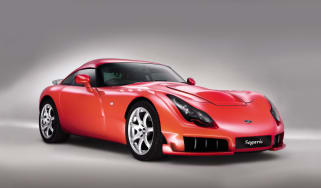 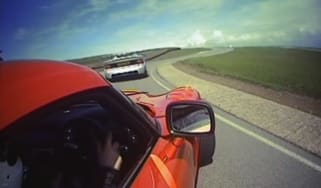 With its wild vents and 406bhp straight-six, Sagaris is the extreme new face of TVR
Skip to HeaderSkip to Content