The TVR Sagaris is supercar quick, looks like nothing else on the road and has an engine note to die for. But how do you spot a good one? 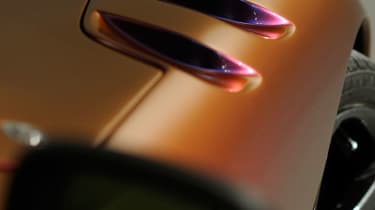 OverviewMartin Cotterill is a partner in Wolverhampton-based specialist Top Gear Automotive, which looks after Lee Sinden’s Sagaris photographed here. ‘There really aren’t any major problems with them,’ says Martin, ‘but it’s important to see a history from a relatively well-known specialist because they do need to be sympathetically maintained.’ Parts are readily available through Multipart and TVR Power, which hold the manufacturing rights. Engine

The well-documented problems with valvegear wear in the Speed Six engine were fixed before the Sagaris’s launch, so no worries there. The tappets do need regular adjustment every couple of years, though, which should be documented. It’s not a cheap job because accessibility isn’t great. Setting up the two banks of three throttles calls for a laptop and specialist knowledge. The engine must not be worked hard until warmed through. Knocks and rattles can be caused by disintegrating engine mountings on the left-hand side, which suffer from the heat of the adjacent exhaust manifold.

The Borg-Warner T5 gearbox is tough but the clutch is a worry. The fingers in the pressure plate’s diaphragm spring can fracture, with replacement costing a minimum of £600 – more if the slave cylinder, mounted concentrically around the gearbox’s input shaft, is leaking as they often do. The cylinder’s seals have been improved since Sagaris production ended, so a replacement should last better. If the clutch action is very heavy, or clutch drag obstructs engagement of first or reverse at rest, budget for a clutch job. Suspension, wheels and brakesThe double-wishbone suspension has no particular weak points, but some owners find the standard Bilstein dampers give a harsh ride. Martin Cotterill speaks highly of Gaz replacements. The Sagaris uses a different power-steering rack from earlier TVRs and doesn’t suffer their leakage problems. There are no known issues with the Sagaris’s brakes. Wheels are either 18in or 19in – check them for pothole damage. It’s also worth checking that the tyres are suitable for a 185mph car…

The Sagaris is too new to show the problems with outrigger corrosion that afflicts some older TVRs, but the chassis is still powder-coated in the same way and rust will spread where the coating is chipped off. It’s a time bomb whose detonation can be delayed or prevented by diligent cleaning and rustproofing. The body is durable but scuffs under the front splitter are inevitable. Many cars have clear chip-protection film on the nose and the flanks, which is worth having. Polychromatic paint, which uses tiny glass beads to diffract light, is also popular. Matching it is not the nightmare you would expect, but two-colour ‘flip’ paints are another matter. In the worst cases, one scratch could mean a complete re-spray. Check the rear side windows are firmly sealed in place – they have been known to pop out. InteriorThe ‘ribbon’ wiring in the dashboard is easily damaged, so make sure everything works. The interior trim uses much leather, so check for scuffs and other damage; the same applies to the paint you might find on the backs of the front seats.

Parts Prices (Supplied by Top Gear Automotive, Wolverhampton. Tyre prices from Black Circles. All prices include VAT at 17.5 per cent)

Not many Sagarises were made. The TVR Sagaris Register shows around 200 cars, although some LHD export cars can be added to that number. Most cars have covered modest mileages and production lasted just two years, so good examples offered for sale will be in the £35,000 to £45,000 price range. You’ll pay more at a dealer but the guarantee is worthwhile. Air-con is a near-essential option, so think twice about cheaper cars without it.