Vauxhall will unveil the Adam Rocks concept at Geneva 2013, a preview of convertible and crossover Mini rivals 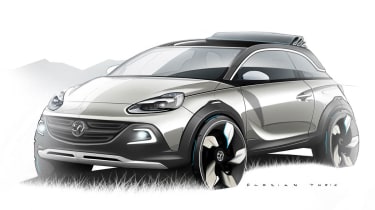 Vauxhall will unveil the Adam Rocks concept at the 2013 Geneva motor show. These sketches give a good idea of how the more muscular Mini rival will look. Vauxhall has revealed little information on the Adam Rocks so far, but it looks set to preview both convertible and crossover versions of the supermini.

Most likely for imminent production is an open-top Adam, hinted at by the folding canvas roof of the Rocks. Just like its Fiat 500C and Citroen DS3 Cabriolet rivals, it’s not a full folding roof, more a retracting fabric panel.

The Rocks also previews a crossover-style Adam, with a 15mm taller ride height and 20mm wider stance, as well as the inevitable black bumpers and rugged wheel arch extensions. Vauxhall describes it as an ‘industry first urban mini-crossover’, though Fiat is set to launch a 500 with a similar ethos soon.

Whether we see both cabrio and crossover designs combined in a production car remains to be seen. Expect a clearer picture when the Vauxhall Adam Rocks makes its Geneva show debut in March.