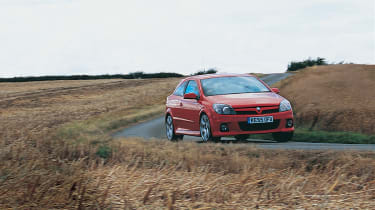 Someone was obviously feeling a little bit mischievous on their way back from a pub near me on a recent Saturday night, relieving both my neighbour’s car and our Vauxhall of their screw-in aerials.

For a short while I thought I could just live without one on the VXR. The satnav still worked fine, so it obviously doesn’t use it, and as our Astra’s radio isn’t of the digital variety I tend to listen to CDs rather than FM.

But upon popping up the satnav’s TMC (Traffic Message Channel) map the following Monday morning, I noticed that it was no longer overlaid with the usual rash of triangular symbols indicating where that morning’s A14 accidents were. Ah. Turns out that the TMC data piggybacks Classic FM’s broadcasts, and with no aerial… well, you know what they say about not appreciating something till it’s gone.

TMC is just one of the reasons why I’ve become something of a fan of KE55’s optional (£1250) CD 70 ‘infotainment’ system. OK, it lacks an oh-so-fashionable iPod connector, but it does an impressive job of playing MP3 discs through its seven speakers without sounding strained (SEAT take note) or artificially bassy when cranked up. And talking of cranking it up, it also has the added kudos of being the loudest stereo tested in the first series of Sky One’s Vroom Vroom…

The satnav, meanwhile, is intuitive and, aside from it not being possible to turn the spoken instructions down quiet enough, hard to fault. And when set to find the shortest route from A to B it’s great for finding new back-road routes. Handy for getting round those A14 snarl-ups.