Is it time to add the Mk1 Astra GTE to the list of all-time great hot hatches? 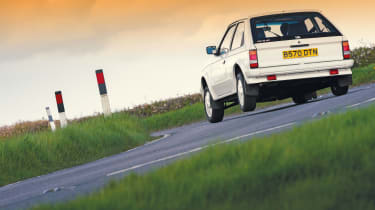 Thirty-two years. That’s a long time to wait for anything, let alone a Vauxhall Astra with 115bhp. And yet, look at the images accompanying this feature and tell me you wouldn’t love to have a go. More ’80s than a Maggie Thatcher and Miami Vice mashup, this was Opel’s (and Vauxhall’s) first attempt at a proper hot hatch. One to challenge VW’s genre-defining Golf GTI, no less. By all accounts it did a very fine job. At least according to contemporary road tests, most notably that from respected British weekly Motor, which pronounced a dead heat between the GTE and a Mk1 GTI, convincingly beating the Alfasud Ti Green Cloverleaf and Ford’s XR3i in the process.

It’s impossible to discuss the way the GTE looks without commenting on its dazzling monochrome colour scheme – reputedly the first example of colour-coding in a production car. There were red, black and silver GTEs, but only those painted white went the whole hog, matching bumpers and wheels to the body colour. I can certainly remember being extremely impressed with the advertising campaign (featuring a white GTE, natch) as a 13-year-old back in 1984. The slogan ‘Nought to Naughty Naughty in 8.5sec’ seems almost laughable now, but in the year Prince ruled the US Billboard chart with ‘When Doves Cry’ and Frankie Goes To Hollywood scored a hat-trick of UK No1s, Vauxhall’s first proper stab at a hot hatch was a serious machine and a sure-fire poster car for pubescent boys like me. 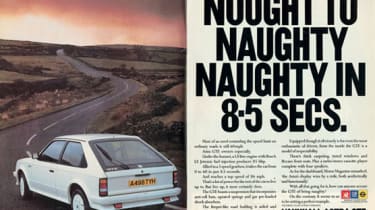 Like the majority of cars from the ’80s, the Astra’s interior is simplicity itself, but all the important elements are there. Up front, a pair of super-comfy and nicely supportive Recaro recliners look the part, especially in their grey pinstripe velour upholstery. The dashboard is shallow, the instrument binnacle boxy like the exterior. Bold analogue instruments are simple and clear, the large round tacho and 140mph speedo separated by a quartet of oblong secondary gauges for fuel, water temp, amps and oil pressure. Wind-up windows are a bit of a blast from the past, as is the glass sunroof (we used to call them moonroofs, for some reason) and the push-button radio/cassette deck, complete with electric aerial that extends out of the right-hand front wing. The overall ambience is that of a basic car with a bit of embellishment. The plush-yet-purposeful results are endearing and strangely effective.

The driving position is sound with minimal offset to pedals or steering wheel, which is plastic. It feels good in your hands, though, and is the perfect diameter to apply some useful leverage to the unassisted steering while still feeling sporty. Its boss is emblazoned with the ‘GTE’ logo to offer you a reminder that you’re in something special. The pedals do have one quirk, though – the throttle is set further into the footwell than the clutch and brake. I can’t think of any good reason why, and it does make heel-and-toe blips a bit awkward to execute.

The 1.8-litre four-cylinder engine has Jetronic fuel injection but still takes a good few churns of the starter before it comes to life. It sounds modest, but the orange tacho needle jumps enthusiastically enough when you prod the throttle. The long gearlever woggles around and feels a bit vague, but it slots through the H-pattern gate cleanly enough. Of all the Astra’s primary controls, it’s the unassisted steering that’s the most alien. Hefty at parking speeds and with a smidge over four turns lock-to-lock, it’s not promising, at least to arms and internal G-sensors calibrated to modern cars with their low-effort, highly-responsive steering.

Unsurprisingly, your first few miles in a GTE are spent reacquainting yourself with all kinds of sensations long since consigned to hazy memories. First of all there’s the strange exterior size/interior space conundrum, which is akin to Dr Who’s Tardis. Then you glance at the wafer-thin door-cards and breadstick-like A- and B-pillars and you understand where the space has been gained. Best not to think about the consequences of being side-swiped by a Range Rover. 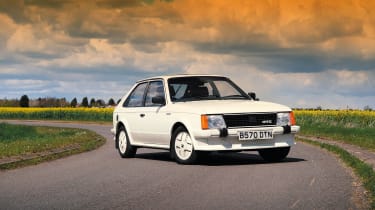 The upside to being in a small ’80s hatchback is the sense of lightness. The controls might have weight but, at smack on a ton, the GTE itself is nearly 50 per cent lighter than today’s Astra VXR. That’s why 115bhp and 111lb ft of torque punts you along so well, and why the modest disc brakes do a decent job, at least once you’ve pushed through the initial bit of soggy travel. Despite these mixed messages, the GTE is one of those cars you know will be a hoot to thread along a decent A- or B-road.

The engine isn’t exactly a screamer, but standard Vauxhall engines never really have been. What they do well is deliver solid, gutsy, workmanlike shove across a decent rev-range. Consequently, the GTE has a natural, freely given and readily accessed pace. Work that orange tacho needle towards 5000rpm and you’re soon going well. Wind it round to 6000 and you’re really zipping along, though it’s clear there’s not much to be gained from pushing through the final 500rpm or so to the red line.

The refreshing thing about this car is that, although it takes a lot longer than we’ve become used to getting up to a healthy double-figure speed, once there the real fun is in preserving that pace. A Golf R has a similar propensity for maintaining momentum, but unfortunately it’ll tackle most roads in most weathers at a speed that’s well into three figures. Hugely impressive, but a bit silly. By contrast, you can drive the socks off the Astra and only feel mildly naughty. 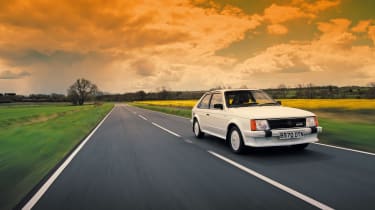 And trust me, you will want to be mildly naughty because, once up and running, the GTE really comes to life. The unassisted steering lightens considerably at speed, but it has some on-centre vagueness that makes you question the Astra’s appetite to turn in. Keep the faith and, once you’ve made your initial input (much smaller than the four turns lock-to-lock gearing would have you expect), you get the most brilliant sense of loading and subtly increasing resistance as the chassis begins to soak up the cornering forces.

The suspension is supple and the tyres a small and compliant 185/60 on 14in rims, which means there’s considerable ‘give’ before you really build a detailed picture of what the car is doing. But it’s this phase of increasing lateral load that gives you so much information through the steering – and ultimately what makes the GTE such a transparent car to read as you approach its limits.

Once committed, the GTE is supremely stable, but never flat-footed or inert. It always seems to have a little bit of grip in reserve, so although you can and will make the front end begin to push, it does it with such progression that you can wind a little bit more lock in and it finds a little bit more grip. Traction is never an issue – hardly surprising with such modest power and torque – so you can be confident with the throttle early in the corner. But just as impressive is the GTE’s behaviour if you do find you need to back-off mid-corner, for rather than punishing you with a widowmaking wag of lift-off oversteer, the Astra simply and neatly tightens its line.

Once you’ve experienced this, you know you can trust the GTE implicitly, and, far from inhibiting your fun, it actually takes the fear out of fast driving, as I learn when we start shooting the inevitable evo trademark cornering shots. I’m the first to admit this is not real-life driving, but cornering shots do (literally) offer a snapshot of a car’s behaviour under provocation. They are especially revealing in the GTE, as were it not for the need to really push it for the benefit of Dean Smith’s 400mm lens, I’d never have peeled back the final layer of its abilities. 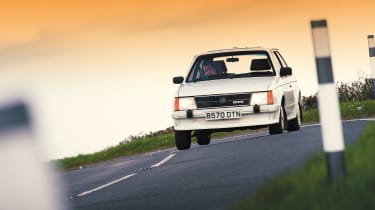 Carry a slightly uncomfortable degree of speed, tip it in regardless and the GTE remains supremely progressive but extends itself beyond that brilliantly benign envelope, soaking up the lateral load on the outside front corner, cocking an inside rear wheel high in the air, then ever-so-gently transitioning into a helpful degree or two of slip from the rear. It feels like the most natural, controllable thing in the world, even though, judging by the wide-eyed grin on Deano’s face, it must look hysterical as I tricycle through his viewfinder.

I can tell you now that if I’d been foolish enough to take this level of liberty in a 205 GTI, he’d have been running and I’d have been pulling twigs and grass from the wheels and rear bumper. Over the years, Vauxhall forgot how to achieve this blend of up-to-the-limit stability and over-the-limit poise, preferring handling that majored on the former. That’s why the French marques in particular gained such strong reputations for entertaining dynamics (and numerous lift-off-induced shunts), but this Astra is a lesson in how front-drive can be friendly and fun.

I’m not sure what I was expecting from the GTE. I knew it would look cool and I hoped it would be fun of sorts, but could it really deliver a genuinely strong driving experience? Honestly, I had my doubts. Shame on me, for after a brilliant day’s driving I can say with equal candour that I haven’t had this much fun in years. The more I drove it, the better I got to know it, and the better I got to know it, the more I learned – and liked.

We get very hung-up on what VW and Peugeot were up to in those nascent years of the hot hatch – and understandably so – but, on the evidence of my time with it, the Mk1 Astra GTE is unfairly overlooked. What’s more, it gets there on its own terms and in its own unique way. Rare is the car with a repertoire of such breadth and quality. In terms of exploitable, sustainable point-to-point pace, it would surely have taken something seriously potent – like an E28 M5, say – to go meaningfully quicker on a challenging road. As we all know, that’s the mark of a great hot hatch, and this terrific Astra is right up there with the best of them.