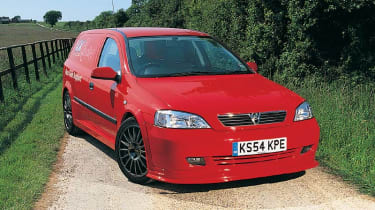 If you're reading the magazine for the first time, then let me reassure you that you won't find any Astravans elsewhere in this issue. Or in any of our back issues, for that matter. What's more, I'm not about to go banging on about the 610kg payload capability. Or the 1.6 cubic metres of space, perfect for random plumbing equipment. And I'm absolutely not going to tell you about its 79bhp 1.7-litre diesel engine - because it hasn't got one; instead it's got a 239bhp turbocharged 2-litre petrol engine. In short, this is no ordinary Astravan.

Unfortunately just a one-off, it was developed with the help of Triple-Eight Engineering to attract attention at the Commercial Vehicle Show earlier this year. The standard engine was ripped out and in went the 204bhp 2-litre from the Zafira GSi and various hot Astras. It was then tweaked on a rolling road to produce 239bhp at 5500rpm and 239lb ft at 3500rpm.

To handle this not-inconsequential power increase, the driveshafts, wheel hubs and five-speed gearbox were also taken from the Zafira GSi. Suspension came from the 888 Astra Coupe, lowering the ride by 25mm in the process. Finally, fantastic anthracite multi-spoke OZ Racing wheels bound with 235/40 ZR17 Goodyear Eagle F1s replaced the standard 14in steel items. The results are reflected by the bald figures of 150mph+ and sub-7.0sec to 60mph. And when Vauxhall offered us a chance to road-test it, we bit their hand off!

Despite a relatively restrained body kit, it seems to shout at anything in its vicinity. However far-flung the corner of Sainsbury's car park you hide it in, the red beastie still seems to demand the attention of everyone within a 200-yard radius, seemingly hugging the floor of its parking space and challenging anyone and everyone to take it on.

Inside, the initial impressions are the same as those of any other van (or racing car), namely those of driving around in an empty biscuit tin. This does, however, highlight one of the best aspects of the van's character - lightness. The standard van weighs slightly less than a Fiesta ST and this one certainly doesn't feel any heavier.

In a so-called straight line (under power, the front tugs and weaves in anything but a single direction) you can happily blow most cars into the weeds away from the traffic lights. The delivery, as with the standard 2-litre turbo engine, is slightly old-school, but the sudden punch suits the Astravan's character and is mighty when it arrives.

The brakes, though, deliver an even bigger hit. Uprated to 308mm at the front, the discs are clamped by a special 888-developed friction material and pull the Goodyears into the tarmac so unexpectedly hard that it can give the unprepared an instant headache. No hint of ABS interference either, and wonderfully progressive feel.

When centred, the steering wheel (which would look more tasteful if it were made of real instead of imitation carbonfibre) can be wiggled and waggled through several degrees of lock with no apparent effect on the front wheels. Thus, when you turn the wheel to tackle a corner with any conviction, nothing much happens initially. Then, just when you're thinking of excuses for hedge-butting, instant and almost alarmingly strong bite arrives, railroading you around the bend. You feel utterly devoid of connection with the front wheels, yet the grip is extraordinary. How fast you can travel down a B-road becomes a test of faith and nerve as you rely on the promised grip rather than any tacit evidence of it through the steering.

This remoteness leads you to expect large helpings of understeer but the grip is such that it never materialises. Then you remember the void over the back wheels, which might lead you to expect the tail to be very lively, but although it moves around encouragingly if you turn-in on the brakes, it's actually quite hard to really unstick it. So you charge across country, the Astravan skipping around but somehow hanging on. Imagine being sat on the back of a bull, on the understanding that it will give you one helluva ride but probably won't actually chuck you off, and you've got something of what it's like to drive the Astravan. Fun, sort of.

Ultimately the 888 Astravan deserves its place within these pages. After all, when the Bugatti Veyron hit 248mph at Ehra-Lessien, rumour has it there was an Astravan sitting on its tail, flashing its headlights, just waiting to get past.