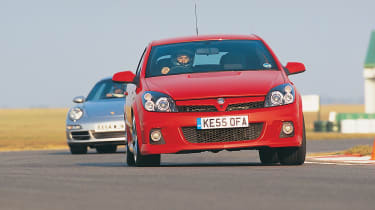 Starting out noticeable but ignorable, passing through comical, and eventually developing into a concentration-hogging distraction, the VXR’s taste for torque-steering and tramlining had become a problem.

With over 10,000 miles under its wheels - including a Fast Club appearance (evo 091) and an evoactive trackday at Snetterton - it seemed likely that the culprit was the steadily wearing front tyres losing the ‘give’ that comes with taller tread blocks. However, a quick check with a depth gauge revealed that they still had 3mm of tread left across the section that the law takes an interest in, which seemed a bit early to be considering binning them for a new set.

Instead, a visit to my local tyre-fitter saw us both turning a partially sighted eye to the ‘least worn tyres on the rear’ rule as front and rear wheels were swapped over. Now with 6mm of tread up at the pointy end, the Astra’s steering wheel has returned to its far-more-relaxed former self, making the driver’s Recaro an enjoyable place to be once again.

A few other members of the evo team have spent time in that same seat recently, and although no-one would go as far as to proclaim the VXR to be the finest-handling hot hatch they’ve encountered, there’s always a distinctly positive vibe when the keys are handed back. You can tell they’ve had fun behind the wheel, thanks in no little part, I suspect, to the way the Astra always goads you into using its 237bhp to the full. Cruising is not in this car’s nature.

Which makes the fuel consumption figure you can see above even more surprising. From those early miles averaging somewhere in the mid-20s mpg-wise, now that it is run-in the VXR is regularly returning figures well into the 30s, leaving me with one of the most economical cars on the Fleet. Who’d have thought it, eh?