Jethro returns to a rally-spec Blyton Park to see which is faster, a Datsun 240Z rally car or KTM 450 EXC. Video here 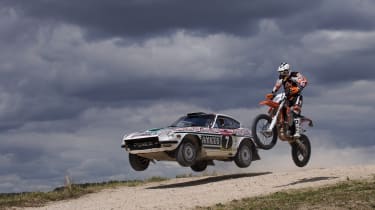 This week’s car v bike video brings dusty gravel and a great big jump into the equation, so we had to ditch the stiffly sprung tarmac stuff for more acrobatic machinery.

The bike might not be perfectly setup for this layout, but its rider, Ady Smith, has a few tricks up his sleeve to drag a hot lap out of it. As multiple British Enduro and British Supermoto Champion, he wastes little time before backing the 111kg machine into corners and chucking up stones to set a blistering laptime.

How can an old Datsun compete with that then? Well with a Safari Rally under its belt, the Datsun we've sourced for this battle looks a little over-prepared for the comparably miniature jump of Blyton’s dusty infield. Fitted with suspension worth over £5,000 per corner and strengthened to 1000kg to enable massive Safari launches, there's no denying the Dansport prepared 240Z looks achingly cool with stone chips, dents and battle scars beneath its Amigos beer livery.

Its 270bhp straight-six engine sounds epic from outside, and watching driver Andy wrestle his way through the dogbox looks tiring from any angle. But having spent hour upon hour in the classic competition car, does he manage to tie together a lap to challenge the KTM?

Just incase it wasn't enough, we may have snuck in a small, rally-legend shaped surprise to boost the car’s chances of victory, but was it enough? The video above reveals all...