Praga R1R video review - as extreme as road cars get?

Outrageously capable, it's hard to believe the R1R is road legal 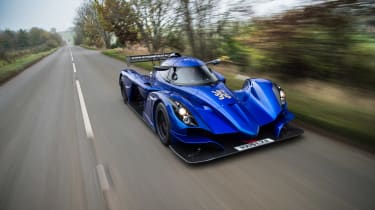 The Slovakian-built Praga R1R is about as extreme as road cars get. Powered by a turbocharged Renaultsport engine, featuring a carbonfibre monocoque, developing massive downforce and finished with stunning attention to detail, it’s an oddball but intense trackday special.

Praga has a history stretching back to 1907 and at one time made passenger cars, trucks, aeroplanes, motorbikes, military equipment, agricultural machinery and pretty much anything else you can imagine.  However, more recently Praga has been revived with successful Enduro ‘bikes, championship-winning karts (built in Italy) and the R1 racecar. The R1R, launched in late 2015, is Praga’s first road car since 1947 and they’re limiting production to 68 units – one for each year since the last Praga road car was built. It’s essentially a development of the R1 racer and costs €198,000 or close to £150,000.

The basis of the R1R is a tiny carbonfibre chassis with subframe at the rear for the mid-mounted engine and inboard suspension and another at the front, which also features inboard pushrod-operated Koni dampers. The small teardrop-shaped central structure means that the R1R usually has a centrally mounted single seat configuration. You can opt for a two-seater set-up (and swap between them quite easily) but we wouldn’t recommend it. The throttle and brake pedal (no clutch) are separated by the steering column so you have to left foot brake.

Power comes from a 2-litre four-cylinder F4R 832 Renaultsport engine (from a Clio 200) with Praga’s own turbocharging system applied. It produces 390bhp at 6750rpm and 391lb ft at 4200rpm and drives through a sequential paddle-operated Hewland ‘box with a centrifugal clutch that means pulling away is simply a case of slowly building up the revs… The R1R weighs 670kg so performance with the engine running full boost (you can turn it down to around 330bhp) is suitably nutty. Think sub-3 to 60mph. More impressive still is the downforce, the R1R producing more than its total mass by 124mph. 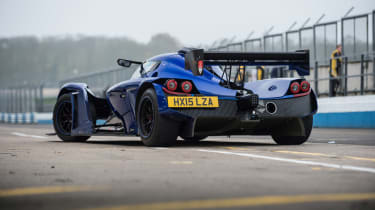 Our first taste of the R1R is – fittingly enough – on track at Donington. It’s pretty clear that while a ‘road car’ in the sense it can be registered for road use, the R1R’s performance is really only truly appreciated when you can lean on its extraordinary mechanical and aerodynamic grip.

First you have to squeeze in, which isn’t easy with the dual carbonfibre seat in place. The central seat (which we try in the R1 racecar) is much the better bet, not least because otherwise you sit at an angle, hips to the left of the steering wheel and legs having to feed to the right to the pedal set. It’s weird and not a great way to feel connected to the car.

Having said that, confidence builds quickly simply because this car is outrageously capable. There are some areas that need work – the throttle response is very binary, creating a feeling of turbo lag that isn’t really there and the steering is perhaps too fast once the downforce is aiding steering response - but the fundamentals are astonishing. Even on trackday Toyo Proxes R888 tyres, the grip this thing generates is simply nuts. It howls through the Craner Curves flat-out with almost zero steering input, the brakes are superbly feelsome and allow you to attack braking zones even if you’re not a natural left-foot braker (I’m not), and the way it can drive around other road and race cars at Donington has to be seen to be believed. To me the straight line performance doesn’t feel as crazy as, say, a Radical SR8, but the downforce level feels higher and because it’s so tiny you can cut cleaner, more efficient lines around the circuit.

The engine is really sweet. It doesn’t howl like a normally-aspirated screamer but compared to the now ubiquitous Ecoboost engine in many of these sorts of cars, it’s full of character and so much more exciting to wring out to the 7000rpm limiter. The ‘box is quick and effective but could be smoother on upshifts. Overall it’s enough to leave you slightly dizzy. The R1R is just so fast around a track and so secure. For me the only issue is that you tend to drive within its limits and don’t feel encouraged to venture beyond them. Radical’s best trick is that they have all that downforce but feel so predictable when they start to slide. Maybe the R1R would remain composed and easy to exploit when the tyres start to slip but I didn’t get the feedback to go there, to start exploring its ultimate balance.

On the road the R1R feels extreme to the point you can barely believe it’s legal. I didn’t venture far but the combination of little steering lock, a very firm ride, the sheer noise of the engine and ‘box and the centrifugal clutch’s quite abrupt take-up made it feel less resolved than, say, an Atom 3.5R or Radical RXC Turbo would do. Everything is adjustable so perhaps a good road compromise could be hit upon but I doubt the R1R will ever feel truly useable on the road. 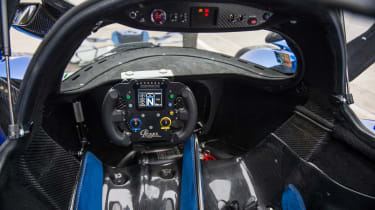 In terms of design, build quality and the sheer quality of componentry, the Praga R1R can hold its head up high against anything, even with such an eye-watering price. It really is jewel-like in its execution and even on the move the whole car exudes a sense of meticulous engineering. However, it’s not as useable as a Radical RXC Turbo, which is perhaps the closest thing to a ‘rival’ it has. Even so, it’s a quality item and an addictive track car for those with a host of supercars or sportscars for the road already.

Go to www.pragaglobal.com for more details.