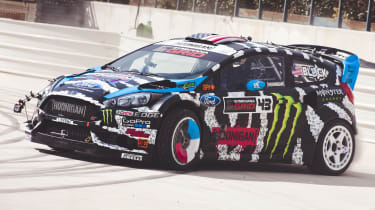 Previous Gymkhana videos include some pretty high-budget stunts, none of which are more impressive than number five, which involved closing sections of San Francisco. Main sponsor Castrol has combined football and Gymkhana in a battle-type format. Henry Catchpole went behind the scenes of the latest video, to talk with Ken Block about the latest car, the film shoot and the driver’s rally career.

The Fiesta is a full WRC-spec machine, based on the M-Sport developed model, which has been built to Rallycross specification. That means that instead of the 1.6-litre engine, it has the older 2.0-litre unit, with a smaller turbo to give a much more drift-friendly power delivery.

During the interview, Block discusses some of the unique aspects of the Footkhana car, such as the bespoke and strengthened gearbox, fifteen52 motorsport wheels, the specific drifting tyres as well as some of the unique modifications – like the ‘Hoonigan’ handbrake lever.

Ken Block grew up in the USA, a country where rallying was very much unheard of. Taking inspiration from fellow US rally driver Travis Pastrana, he sought out a place in the sport, learning the art of rallying in one of a few rally schools in the country. Although competing in the World Rally Championship was a dream come true, he maintains that he was never in it to win outright, but more as a ‘fun side project’.

During the interview, Block discusses his performance, and maintains that he struggled with competitiveness due to the different methods of writing pace notes. Watch the video for the entire interview, and some exclusive behind the scenes footage.