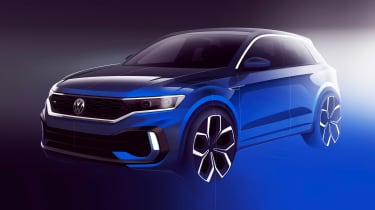 Volkswagen has released a sketch of its T-Roc R, a compact performance SUV that will rival the Cupra Ateca and, well, VW’s own Golf R. The real thing will appear at this year’s Geneva motor show in March in what Volkswagen is calling ‘near-production’ concept form – which could perhaps also be called ‘in the queue for WLTP approval’ form.

> Click here for more on the Volkswagen Golf GTI TCR

If the T-Roc R is to follow the Golf R’s formula, we can expect it to be powered by the same turbocharged 2-litre four-cylinder engine that the VW Group puts in the majority of its hot hatches. As an R, the T-Roc is likely to get the full 306bhp and 295lb ft of torque – the most that engine has produced in factory trim. The recent video does somewhat make us doubt this theory, however, with some clips appearing to preview a five-cylinder soundtrack. The T-Roc and the Golf are built on the same platform, so transplanting the Golf R’s oily bits into a T-Roc body won’t require a major re-engineering project and most elements will be carried over with relative ease. The main aspect that separates the Golf R from its GTI relatives is its use of four-wheel drive rather than just front-wheel drive. The Golf R’s Haldex system, which uses a clutch pack ahead of the rear differential to engage the rear axle whenever extra traction is needed, is already fitted to ‘ordinary’ T-Rocs, so will certainly make it to the R version.

As the Golf R is no longer available with a manual gearbox, it’s extremely likely that the T-Roc R will also only be available with VW’s seven-speed DSG transmission.