The VW Amarok is a European alternative to the Nissan Navara and Mitsubishi L200. 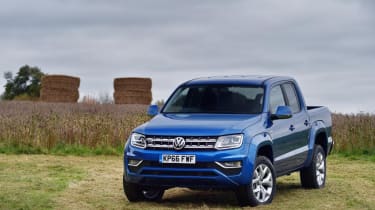 The Volkswagen Amarok has been on sale for a few years now, but despite the relatively limited market for pick ups in the UK, the Amarok’s global popularity has lead to a light refresh, along with a new V6 diesel engine.

It exists only as a five-seat, four-door double cab and costs from £32,503 on the road. Available in a range of three consistent trim levels, your £32k will get you the entry-level 201bhp Trendline model, with just about enough kit to appease the most middle class of tradesman. Aimed higher than the usual pick up, the Amarok then offers Highline and Aventura trim levels, the latter available exclusively with a more powerful 220bhp diesel.

The new V6 replaces the prior cars 2-litre four-cylinder engine option, but also deletes the option of a manual gearbox, now only being available with an 8-speed automatic gearbox. 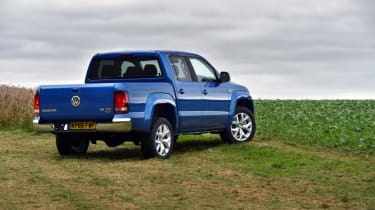 All models get a rear diff lock and a host of off-road gubbins including hill descent control and – more impressively – off-road ABS, which allows foot-stamp emergency braking on ground you’d struggle to stay standing on.

The upside of the new V6 engine and auto gearbox is a raised towing limit of 3.1 metric tonnes while its payload can top 1100kg, making it a useful tool if you’ve a trackday toy or racing car and associated accessories to lug from circuit to circuit. The Amarok is also unique in its class in being able to handle a Euro pallet loaded sideways. There are also a variety of hard-top and tonneau cover options for the rear deck.

It’s the most car-like of the passenger pick-ups on sale. This is thanks in part to the familiarity of the VW parts bin dashboard, but is also attributable to the ride. Being a leaf-sprung commercial vehicle, it’s inevitably less settled than a typical SUV, but it’s notably better than the bulk of its rivals and it will take journeys of more than an hour for the Amarok to become uncomfortable.

The steering will seem a little slow to those only familiar with SUVs, but it’s still relatively incisive and on the whole, the Amarok handles very tidily and predictably with strong grip all-round. With an empty payload, it’s a fun thing to hustle along at surprising speed, especially with the smooth new V6 engine, which has a mid-range more than punchy enough for the odd overtake. It bodes well for an Amarok full of heavy goods. 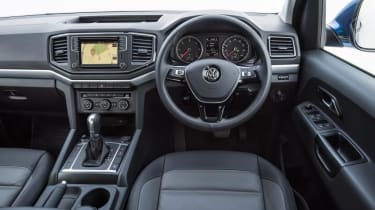 The 8-speed automatic gearbox is the familiar ZF unit used elsewhere in the VW group, but has been configured for shorter gearing for those inclined to tow itself and other off road.

It is here that the Amarok is perhaps at its most impressive; it can climb up impossibly steep and muddy banks and negotiate its way back down them with ease, and if a mud-plugging pick-up is your requirement, it’s unlikely to put a foot wrong.

The pick-up is growing in popularity quite rapidly elsewhere in the world, and although they are still no SUV to drive, it has driven development of these sorts of vehicles. As a result Volkswagen doesn’t really offer stripped out workhorse versions of the Amarok so it competes at a might higher starting price as a result.

The Mitsubishi L200 and Toyota Hilux may be available with leather upholstery and fancy wheels, but these are still the most workman-like of the pick-ups on the market. They share the same strengths and faults, which is to say although tough and reliable, they are not any more sophisticated mechanically then they were 10 years ago.

Nissan’s Navara is available with a V6 diesel engine option and is the only option in the class that runs multi-link rear suspension, but the resulted load capacity is reduced and it doesn’t represent enough of a step up in driving terms to justify it. 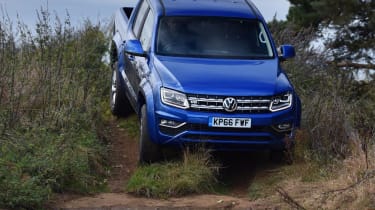 The two best in class options are Volkswagen Amarok and Ford Ranger, with the Ford offering a much more value orientated proposition, the thirsty five-cylinder diesel engine is the main issue, but driving dynamics, in-cabin technology and safety are all impressive for this sort of vehicle.

The Amarok is best in class overall then, but like most VW’s you’ll have to pay for it over most rivals. But the VW fights back with the best residual values and lower running costs.

A two-ton turbodiesel commercial vehicle may be as far away from the ethos of our favourite performance cars as it is possible to get, but this can be a gratifying thing to drive – perhaps it’s the adult-size Tonka Toy feel a big utility vehicle with a torque-rich engine imbues. If you’re in need of something sensible to tow a track car or regularly drive large loads around rugged terrain, this is a fine and surprisingly satisfying option.

After living with an Amarok for six months and 17,335miles, we found that it did an average of 29.9mpg. The Amarok that we ran was 'Ultimate' spec, and had heated Alcantar seats, satnav, Bluetooth, parking sensors and a reversing camera. These creature comforts certainly made it feel less like a commercial vehicle. The only issue we had was how appealing it was to thieves; a window was broken by a miscreant to access the tools inside the cabin that are needed to remove spare wheel, which they also stole. It cost £374 to replace the spare wheel and £109.30 to replace the window.