Volkswagen lifts the covers on its electric Beetle concept, the E-Bugster. Details and gallery here. 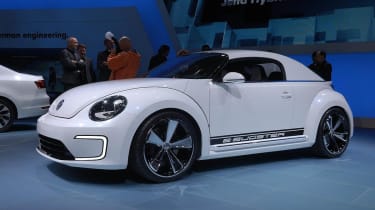 Wanting to show the world how committed Volkswagen is to electric motoring, and lowering its carbon footprint, the German manufacturer has unveiled this, the E-Bugster - An all-electric Beetle concept.

With the emphasis on it being sporty, this Beetle has a compact 85 kW motor, and will do 0-60mph in a claimed 10.9 seconds, and even if that doesn't sound particularly quick, a relatively low weight and instant torque should make this an interesting drive.

Range is limited to about 110 miles, but the battery can be charged in as little as 35 minutes from a quick-charge station. Much like the Nissan Leaf, the E-Bugster can be charged from an ordinary power outlet too, although this will take considerably longer.

This is thanks to the new 'Combined Charging System' which has been developed in conjunction with BMW, Audi, Daimler, Porsche, Ford and General Motors in an attempt to pave the way for a universal electric car charging standard.

The electric-drive system, which VW is calling 'Blue-e-Motion', consists of a centrally-mounted 85kW module, weighing just 80kg, and a compact lithium-ion battery pack which sits behind the front seats, losing the rear seats altogether. This system will go into production as early as 2013, being put into its current production car line up, the first probably being the Golf.

Volkswagen claim that the Bugster draws a lot of inspiration from its 2005 'Ragster' concept, a lower and wider sporty Beetle, and if it goes into production, would directly rival the MINI Coupe.

VW design boss Marc Lichte told evo that the look of the Bugster is inspired by the cult of 'Speedster' Beetles in the 'seventies - complete with Porsche-style Fuchs alloys. He said that one of the main design criteria for the concept was to make 'a Beetle that appeals to men as well as women.'