Retro styling and last-gen underpinnings, but the sportiest Beetle still has merit 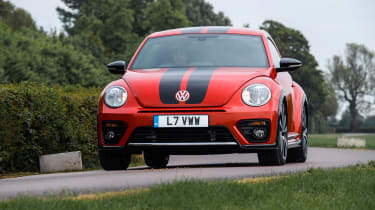 You’d be forgiven for forgetting the Volkswagen Beetle exists. Introduced in 2011, it’s one of the older models in Volkswagen's range, and since the widespread adoption of MQB, now shares its previous-generation platform only with the (even older) Scirocco.

Still, in styling terms it’s a breath of fresh air in the maker's otherwise uniform range, and in R-Line trim, as here, it could be considered a left-field alternative to some of the more conventional warmed-up offerings in the family hatchback segment - not least the equivalently-sized Golf. 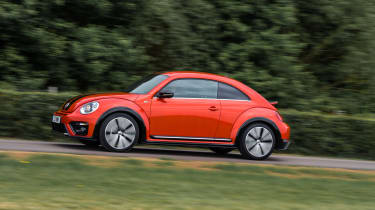 R-Line Beetles get one engine and one engine only - a 2-litre, four-cylinder turbodiesel under the ubiquitous TDI banner. It makes 148bhp in this iteration (at 3500rpm), with a solid 251lb ft of torque on tap from 1750rpm.

In the real world, the TDI begins pulling with conviction from around 1500rpm and there’s not a great deal of use (or joy) to be had revving it beyond 3500rpm. Keep it beyond these two points and the engine provides punchy performance whichever gear you find yourself in, while noise is minimal (by diesel standards) and response is respectable.

> Volkswagen Golf GTD review - A proper hot hatch, even if it's a diesel?

Officially, the Beetle R-Line will reach 62mph in 8.9 seconds and run out of steam at 126mph, while the DSG version (with six ratios, just like the manual) manages the same 0-62mph run and tops out 2mph earlier. The manual ‘box doesn’t have one of the world’s great interactive changes, but it’s light and unobstructive, and allows you to adopt a bit of a flow as you surge between corners. Grabby brakes make heel-and-toe downchanges difficult, but that’s far from being a Beetle-only issue within the VW range.

As this is a diesel, we’ll mention economy: VW claims 61.4mpg combined of the 2.0 TDI, a figure that doesn’t actually seem unattainable given the ease with which figures in the 50s show on the Beetle’s electronic display. 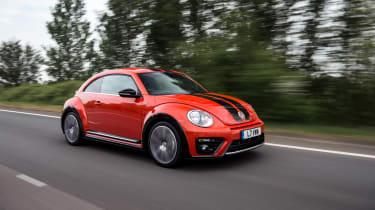 The Beetle is one of the older models in VW’s range now and, like the Scirocco, still sits on the VW Group’s “A5” platform (not to be confused with the unrelated Audi A5).

In pure running gear terms the Beetle is entirely conventional: MacPherson struts up front and a torsion beam at the rear. A modern Golf, for comparison, uses a multi-link setup at the back. At 1421kg, the R-Line is 67kg heavier than the equivalent Golf - illustrating one of the benefits of the newer MQB platform. 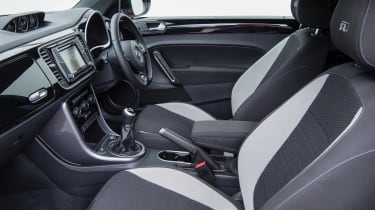 It’s easy to assume that the Beetle’s older-generation platform would significantly date the way it drives. Instead, the Beetle drives much like a non-GT or R version of a brand new Golf, or Leon, or A3, or any other more recent model in the Group’s lineup. The steering, for instance, feels very familiar - there’s the same rate of response, pleasant weighting, and directness as you’d find in a Golf (albeit with even less feedback), and it generally rides well too, albeit firmly on the R-Line’s 18-inch wheels when driven over patchier surfaces. On the up side, body roll is minimal.

The balance feels more nose-led than on a sporty Golf, but on 235-section tyres there’s more grip than any Beetle owner is likely to need, and despite the diesel engine’s torque output, the front wheels are rarely troubled for traction, at least in the dry. All this conspires to give the car an easy pace on A- or B-roads, while longer journeys pass by much as they would with… well, a Golf. Not thrilling, but better than expected for something that trades so heavily on style.

There are a few Beetle idiosyncrasies, but if you already have your heart set on the car you’re unlikely to be too deterred. There is an occasional rattle from the frameless windows, the rear screen doesn’t have a wiper, and the retro styling means it can be a little difficult to judge the extremities of those sloping front and rear wings - so the R-Line's parking sensors are welcome.

Oh, and the 6.5-inch infotainment screen now looks pretty pokey next to the 9.2-inch one rolling out in VW’s newer models. On the plus side, the Beetle’s cabin is well built and has more character than most, while the upright windscreen, such a distinctive part of the car’s styling, means great visibility around the A-pillars - a rare quality these days. 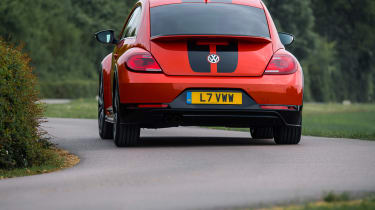 When it all boils down, most of you reading this will not have the Beetle on your shopping list. And even in sporty R-Line trim - and particularly with the diesel engine - it’s less of a performance car purchase than the more powerful, slightly sharper, significantly more practical VW Golf GTD, a car that already struggles to raise evo’s pulse.

However, nor is the Beetle compromised enough - either practically or dynamically - that we’d deter you from buying one over a Golf if you simply liked the styling. In that respect, it can be considered alongside VW’s own Scirocco, which also feels a little more special than the equivalent Golf even though it’s no longer as dynamically adept. 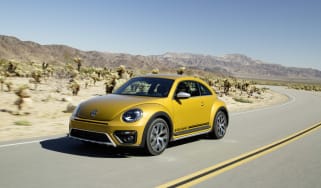 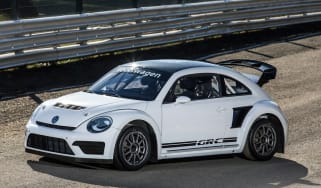 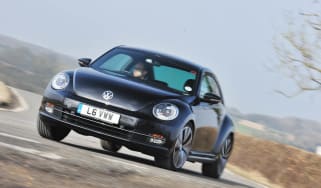 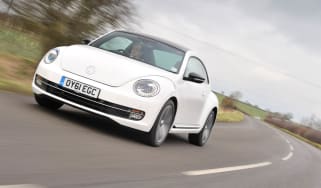 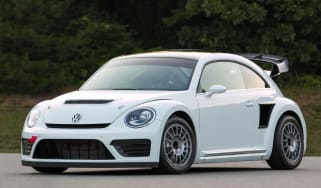 Volkswagen has revealed the new 544bhp Beetle GRC ahead of its debut Rallycross event at the weekend. Details and pictures here
Volkswagen Beetle Dune Concept 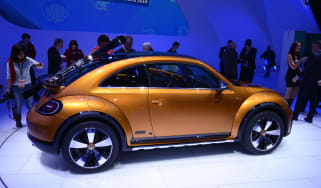 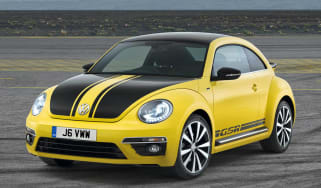 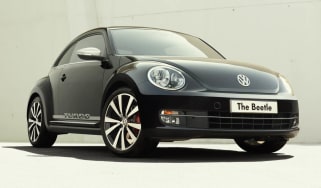 The most powerful VW Beetle on sale in the UK is the 197bhp 2.0-litre TSI, with a GTI engine and Turbo special editions
Detroit motor show: Volkswagen E-Bugster 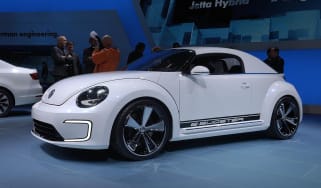 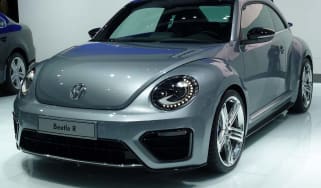 Volkswagen has dropped some very broad hints that it will be launching a production version of the Beetle R concept at the 2011 Los Angeles motor show
Driven: new Volkswagen Beetle 2.0 TSI 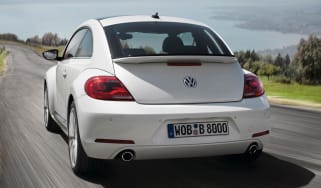 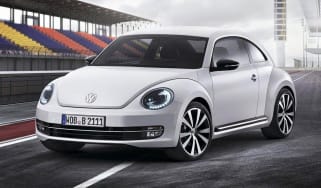 Volkswagen unveils its second generation New Beetle, ready to tackle Mini, DS3 and Audi A1
Skip to HeaderSkip to Content