We drive the new Volkswagen Beetle 2.0 TSI Turbo has a hatchback and Cabriolet 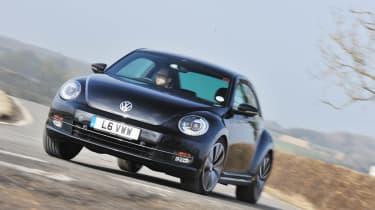 The new Volkswagen Beetle Turbo is the most potent version you can currently buy. It’s powered by VW’s tried and tested 2-litre TSI engine, familiar from Scirocco GTs and Golf GTIs, here producing 197bhp though updated versions see this climb to 207bhp.

It’s good fun, especially as its retro (and not particularly sleek) shape doesn’t immediately suggest sportiness. It lags behind a 2-litre TSI Scirocco for ultimate grip, agility and driver satisfaction, but with nicely weighted steering and that XDS faux-diff maximising traction, it handles cleanly and precisely. It just never delivers much more than that; it’s not a car that excels right at its limits, and it feels better when you push a little less hard and revel in its unique style instead. Its thin-rimmed, uniquely styled steering wheel is tactile to use and encourages you to keep your hands in the quarter-to-three position.

All Beetles with 160PS or more get VW’s electronic differential lock – known as XDS – as standard, helping increase traction and better transfer the power and torque through the front wheels. This 2-litre TSI range-topper also gets a multiple-link rear axle rather than the torsion beam of lesser models. The engine is mated to a six-speed manual gearbox as standard, while the six-speed twin-clutch DSG transmission of this test car is a £1510 option.

A DAB digital radio-equipped touchscreen media system is standard fit, and can be upgraded to include voice-activated satnav and a 30GB hard drive (£1505), while a 400W Fender stereo with eight speakers (some of them ambient lit!) is a £525 option.

Inevitably, there’s also a convertible version. The Beetle Cabriolet costs around £2500 more than an equivalent hatchback and features a folding fabric roof, which is fully electric and opens in nine seconds. It can also be operated at up to speeds up to 31mph, handy should the weather change its mind and rain clouds open quickly. Or if you’re driving through town and don’t want to be quite so visible in such an unashamedly retro car…

The engine is typically good, with a wide band of torque and a rasping soundtrack, especially at higher revs. That said, the Beetle’s upright shape does seem to generate above-average levels of road and wind noise, causing the engine to be drowned out at higher speeds. The DSG gearbox of our car proved a little frustrating; too hesitant in its regular Drive mode, and keen to hang on to a gear too low when nudged into Sport. Without the optional £170 steering-wheel paddles, we were left to use the gearstick, which works in the distinctly un-motorsport-like forwards-for-up/backwards-for-down fashion. Its 7.5sec 0-60 time downplays just how fast the Beetle feels in a straight line, though, its accelerative force very impressive. The top speed is rated at 140mph.

The Beetle Cabriolet is little different to drive, and considering just how roofless it is, the small amounts of scuttle shake that are present don’t offend, and they’re impressive compared to supposedly premium rivals (including VW’s own Golf R Cabriolet…) There is also extra wind and road noise, but this is something that afflicts all fabric-roofed cabrios.

The Beetle is a car with many conceivable rivals, not least similarly engined relatives in the shape of the VW Golf and Scirocco. It’s a more extrovert choice than either, and is likely to be compared to the likes of the Peugeot RCZ or a personalised and well-specced Citroen DS3 or Mini Cooper S. It’s not quite as much fun to drive as those – and is someway off delivering the Mini’s levels of satisfaction – but with impressive practicality (the rear seats can accommodate most adults and there's a well-sized boot) plus more mainstream appeal than before, it’s a car we’re happy to recommend if you’re sold on the looks.

Choosing one of the Turbo special editions (their Silver or Black tags referring to the colour of available decals, not their paintjob) means you can only have a set of 19in ‘Tornado’ alloy wheels. Pick the cheaper 2-litre TSI Sport and you can have 18s, which hopefully take the edge off a firm ride that can be unsettled in urban driving.

Prices start from £22,995 for a Sport 2.0 TSI, with Turbo Black or Turbo Silver special editions (the latter tested here, despite its black paint!) costing £23,695.

Other specials include the £23,195 Fender (only available with a TDI diesel engine) and the GSR, which is limited to 3500 units – just 100 coming to the UK – and gains a very bumblebee-like black and yellow colour scheme, sports seats, bigger alloys and costs £24,995.

The Cabriolet gets its own, rather unsubtle collection of special editions. The Cabriolet 50s, 60s and 70s start at £24,895 and each get their own colour and alloy wheel combination to reflect their respective decades. All models on sale now.