We review the quickest Volkswagen Beetle you can currently buy - the 158bhp 1.4 TSI Sport 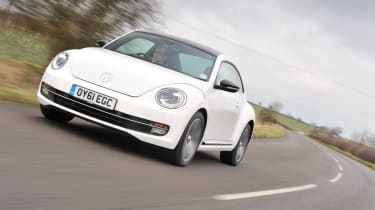 This is Volkswagen’s second-generation new Beetle. This 1.4-litre TSI Sport topped the range until the near-200bhp 2-litre version arrived.

Beetles with 160PS (158bhp in old money) or more get VW’s diff-aping XDS technology, as debuted on the Golf GTI. It usefully increases traction out of corners and gives the Beetle a sporting chance of putting its power to good use.

The 1.4-litre engine is familiar from a plethora of other small, fast VWs and uses both a turbocharger and supercharger to provide twist at both ends of the rev-range and a 0-60 time of 8.3 seconds.

Inside, there’s plenty of appealing technology available in the new Beetle, including an optional Fender audio system. Your £495 buys a 400W output and eight speakers, some of which are ambient lit at night. Lovely.

Better than you’d expect, quite probably. It’s more performance-minded than the car it replaces, and while the steering is artificially heavy and somewhat hesitant in its responses at urban speeds, it quickens up and is much more precise at speed. It's a similar story with the ride, which is a bit unsettled over town tarmac but very compliant on faster roads, and with plenty of grip and that clever faux-diff, you can get into a real groove when traversing B-roads. Trouble is, it doesn’t communicate or reward as much as rivals, be it fellow retro-hatch the Mini Cooper, or VW’s own Scirocco.

The 1.4-litre twin-charged engine is undeniably clever, and makes some interesting noises. With a lack of punch in its mid-range, though, you’ll need to rev this Beetle to get the best out of it, making the claimed 42mpg fuel economy very hard to match.

As mentioned, the Mini and Scirocco are both better drives; a 181bhp Cooper S costs £18,075 as a four-seater hatchback or £19,775 as a two-pew Coupe, while the more practical four-seat Scirocco – with the same engine as the Beetle - is £21,875. But the Beetle’s more masculine new look and appealing driving experience provide a better case than ever for choosing one over more conventional rivals.