The Volkswagen Beetle makes another comeback. With Golf GTI engine and DSG gearbox, is it a good hot hatch? 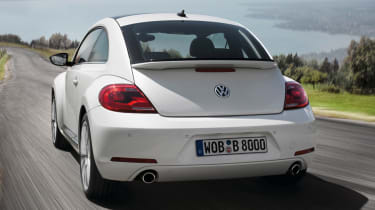 Volkswagen's original car is now reinvented for the second time, but instead of being a cartoon remake like the 1998 version it's recast as a retro-modern driving machine. There's a culture of tuned-up, thrill-giving Beetles in the US, and to a lesser extent in Europe, and the new Beetle is intended to tap into that notion. So it's lower and wider, with the 'glasshouse' moved back to give more of a coupé look. There's even a hint of – yes – a Porsche 911 in its profile.

Under the skin the Beetle is once again Golf-derived – or more accurately Jetta-derived because it is made at the same factory at Puebla, Mexico (as the previous one, and indeed the last examples of the original Beetle, also were). Most versions have a torsion beam rear axle but the top 2.0 TSI, with a 197bhp version of the Golf GTI engine, uses the Golf's multiple-link rear end. VW's R&D chief Dr Ulrich Hackenberg says the torsion axle would work fine in the top model too, but US buyers have demanded the more sophisticated alternative as used on Euro versions of the Jetta.

You can specify a Fender-branded 400W sound system for that rock-music vibe. It sounds particularly good with crisp, powerful and resonance-free bass. European buyers will be denied the 2.5-litre, five-cylinder engine option, though.

Vastly better than the last one, although so far we have tried just the top 2.0 TSI with optional six-speed DSG gearbox. It doesn't feel quite as quick as a Golf GTI – claims are 7.5sec to 62mph and 139mph – but the engine has a crisp, racy and rich note and the step-off from rest is very keen. The steering, although electric with a rack-mounted motor, feels almost like a good hydraulic system, and the Beetle feels firmly planted in fast corners while still allowing a bit of throttle-induced line alteration. It's good interactive fun.

The standard suspension is plenty firm enough, giving a good mix of precision and suppleness. There's no need for the lower, stiffer Sport option, which spoils the Beetle's ability to cope with ridges and ripples. Adaptive damping is neither offered nor missed, but you can have 19in wheels if you must.

The cabin is created mainly out of hard plastics, but in Fiat 500 fashion the dashboard can be in body colour. This extends to the tops of the door trims, too. The dash style has a hint of mid-1950s Beetle about it, but it might be a stretch to expect buyers to know that. Rear-seat shoulder room is tight because of the way the body narrows between the rear wings, but there's a decent boot.

The current Mini is the obvious rival, although the Beetle is bigger. It's as good a drive as BMW's retro-modern machine and has nicer steering, but is more obviously 'styled' and so less authentic. It drives much like a Golf but costs less, which is good news.Anything else I need to know?