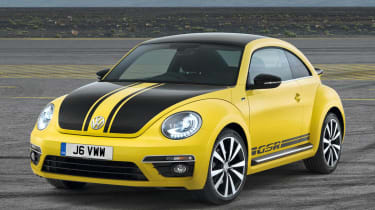 Volkswagen’s new GSR limited edition heralds a more powerful Beetle Turbo. Just 100 of the 3500-strong production run will make it to the UK, which harks back to the original GSR (Gelb-Schwarze Renner – yellow-black racer) with its bumblebee colour scheme. The new car can also be ordered in grey and black, however.

Driving its front wheels is a 2-litre TSI turbocharged petrol engine with 207bhp and 207lb ft of torque, making it four times more powerful than the original 1.3-litre GSR and also 10bhp healthier than the existing Beetle Turbo, the standard version of which will now gain this newer tune of engine. It’s enough to hustle the Beetle GSR from 0-62mph in 7.3sec, while the top speed is 142mph.

As well as the two-tone livery and extra power, the GSR also gets a rear spoiler, 19in Tornado alloy wheels, R-line sports seats and extra dials atop the dash.

The Volkswagen Beetle GSR starts at £24,900 for a manual gearbox-equipped car, while the DSG twin-clutch transmission adds £1500. The GSR is £2500 pricier than the current, 197bhp 2-litre TSI Beetle Sport.