Volkswagen has revealed the new 544bhp Beetle GRC ahead of its debut Rallycross event at the weekend. Details and pictures here 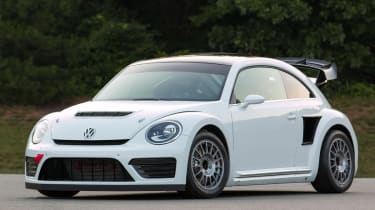 Volkswagen revealed the new Beetle GRC at the Red Bull Global Rallycross with this weekend. With a highly tuned version of its 1.6-litre TFSI engine, the Volkswagen Beetle GRC produces 544bhp, enabling it to scrabble its way from 0-60mph in just 2.1secs.

With power being sent through a six-speed sequential ‘box to all four wheels (with no electronic traction aids), the Beetle GRC is part of the latest breed of rallycross supercar racers that are able to survive landing jumps of 70 feet high whilst racing wheel-to-wheel with each other.

To cope with the strains of such harsh racing, the Beetle’s strut suspension features ZF dampers with a massive 230mm of travel, whilst beefy 357mm front discs and 300mm rears work with four-piston calipers to slow the rally car down.

17-inch wheels are wrapped in 240-width Yokohama competition tyres, sitting inside butch arches of the car’s wide and aero-focused bodykit. Though the car started life as a production spec Beetle, weight has been shed to bring the racer as close to the competition’s 1210kg minimum weight limit.

Volkswagen Motorsport director, Jost Capito, said ‘after Volkswagen of America’s impressive start on the rallycross scene with the Polo, the launch of the new Beetle GRC rallycross car represents the next major milestone. The Beetle boasts a unique appearance and state-of-the-art technology. It will sweep fans off their feet.’