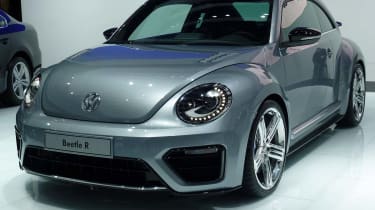 Nobody could accuse Volkswagen of whispering so softly that nobody hears it. After showing off the Beetle R concept at the Frankfurt motor show, the Germany company has brought the same car to the Los Angeles show, with the clear - if as yet unconfirmed - intent of producing a production version.

The R is a surprisingly cool-looking thing in the flesh, with an extended track and blistered wheelarches moving well away from the cutesey stylying of the first-generation 'new Beetle'. As Volkwagen's American advertising slogan puts it, 'less flower, more power.'

The production Beetle R would share its running gear with the Golf and Scirroco Rs, although it would likely only be offered in front-drive form. With 265bhp (or so) it would be properly quick, with a 0-60mph time of under six seconds.

Los Angeles also gave a chance to get close to the new CC, which drops the 'Passat' branding that its predecessor wore in Europe. Once again, it's a handsome looking car - although Volkswagen has confirmed that the former range-topping 3.6-litre version will no longer be offered in the UK after extremely slow sales. Instead we'll get 1.8-litre and 2-litre TSI petrol engines and a choice of four-cylinder diesels.