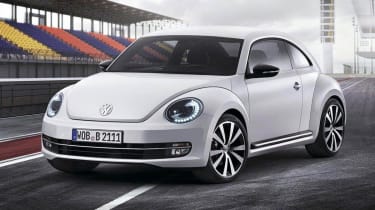 Volkswagen has taken the wraps off its latest iteration of the iconic Beetle.  The car has grown up in stature and in styling, with the new version being nearly 30cm longer than a Ford Fiesta. The extended body has allowed a lower, more fastback roofline, one of many design traits that hark back to the original, and the 2005 Beetle Ragster Concept.  The Beetle remains front engined and front-wheel drive, and will be powered by the usual VAG engine family, from the turbocharged 104bhp 1.2-litre and 158bhp 1.4-litre TSI petrol units to a 104bhp 1.6-litre BlueMotion diesel with stop/start technology, with a claimed 65.7mpg on offer and CO2 emissions of 112g/km. Of most interest to us is a range-topping 197bhp 2.0-litre petrol version to rival hot versions of the Mini Cooper and Citroen DS3. It comes with VW’s XDS electronic differential, as fitted to the Golf GTI, to mimic the actions of a full limited-slip diff. This will remain the hottest Beetle, and is neatly distanced from the similar engined Golf GTI and Scirocco TSI by 11bhp. In line with the current trend for upmarket superminis, extensive personalisation options will be offered, a la Mini and and DS3. There will be three customisable trim levels, Beetle, Design and Sport, each with its own individual character and features. The interior should boast the usual VW quality while the company claims the new Beetle has the stiffest bodyshell in the class, thanks to revised welding techniques. The dash-mounted flower vase of the previous model has been shunned but options will include a panoramic glass roof, LED running lights and 19in wheels, as the Beetle aims for a less feminine demeanour inside and out.  The new car will be on display at this week’s Shanghai motor show and New York motor show, and is due in showrooms in the first half of 2012. Expect the new VW Beetle to compete closely in price with its premium supermini rivals, the Mini Cooper, Citroen DS3 and Audi A1, with prices starting at around £15,000.