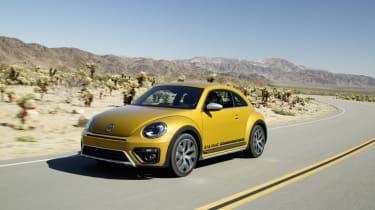 If you’ve ever wanted a crossover based on a retrospectively-styled, Golf-based hatchback, then Volkswagen has created just the car for you with its new Beetle Dune.

It is, in essence, a Volkswagen Beetle given all the modish styling treatments of the typical lifted family hatchback like Volvo’s V40 Cross Country, giving the appearance of off-road ability if not the ability itself. Volkswagen says it harks back to the dune buggies of the 1960s and 1970s – best known as Baja Bugs, for their involvement in the famous Mexican off-road rally.

The Beetle Dune sits 10mm higher than a regular Beetle, though a set of 18in alloy wheels wrapped in 235/45 R18 tyres make it appear to sit higher still. It’s a little wider too, with protective plastic mouldings adding 14mm to its width (now 1822mm), with 7mm added to the front track and 6mm to the rear. 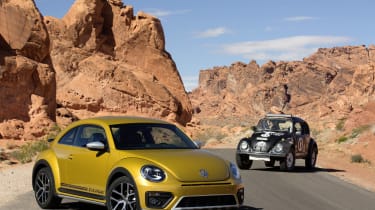 At the front there is a new front bumper design with a large central air intake and Golf GTI-style honeycomb element within. This is lined in a silver finish with a ‘diffuser’ element beneath – though it appears designed to emulate an off-road style skidplate rather than any aerodynamic element you’d care to mention.

To the side there are black plastic trim panels at the bottom of each door, emulating the running boards of old rear-engined, aircooled Beetles, while at the rear there’s another diffuser(/skidplate), LED taillights and a prominent spoiler.

Dune graphics and Beetle badging leave onlookers in no doubt as to the brightly-coloured model they’ve seen scudding past. Those colours include the Sandstorm Yellow Metallic seen here, as well as Dark Bronze Metallic, and various (and less interesting) whites, silvers and blacks.

The interior is suitably colourful too, with a mixture of Sandstorm Yellow and black. Seats are grey-faced, there’s a trio of instruments perched atop the dashboard, and there’s an optional sound system developed by guitar and amplifier manufacturer, Fender.

Presented at the Los Angeles motor show, the Volkswagen Beetle Dune is set to hit the European market in early 2016 in both coupe and convertible formats.