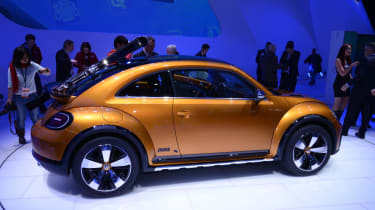 Volkswagen has shown a new Beetle-based concept car at the Detroit motor show, revisiting an old concept car from 2000. The previous concept never made production, however the new Dune concept is much more likely to make the jump, thanks to its production car basis, according to VW.

The ride height has been raised by 50mm, and a set of 19-inch alloy wheels with all-terrain tyres complete the off-road look, giving the Beetle what the company describes as a ‘cool, rugged off-road look’. Fitted with a retro-look ski rack on the back, the company also says that it could hold a sandboard for surfing the dunes – hence the name.

Powered by a 207bhp petrol engine as found in the top level Beetles, the concept is also fitted with a six-speed DSG gearbox. Like all current production Beetles, the Dune remains front-wheel drive – fitted with the now commonplace Volkswagen Group electronic XDS diff.